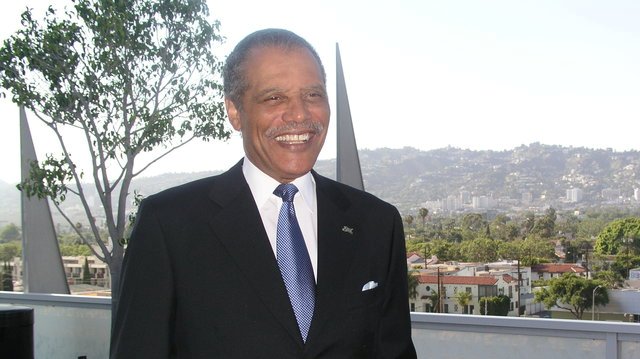 In this edition of "Meet the Candidates," we hear from Council District 8 Councilmember Bernard Parks

Other candidates in the March 8, 2011 CD8 race are Forescee Hogan-Rowles and Jabari S. Jumaane. 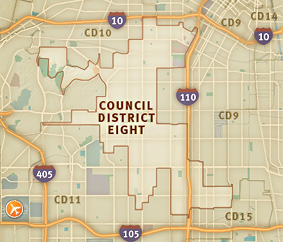 Image and map courtesy of candidate

Tell us about your background and what you'll bring to the table in City Hall. What makes you different from the other candidates, and what qualifies you to represent your district?

I spent 38 years in the Los Angeles Police Department and became Chief of the department in 1997. As Chief, I created the first Cold Case Unit in the Nation and also created an Officer Accountability Program. Since being elected to Council in 2003, I have worked to create ordinances restricting fast food restaurants and auto-related businesses in the district; as well as restricting secondhand smoke for the entire city. As the Chair of Budget and Finance, I have kept the city out of bankruptcy during tough financial times by initiating sound and prudent financial policies for my colleagues to follow.

I have the personal traits of character, courage, conscience, competence and commitment, long-term public service experience and history of achievement,Stability and consistency in family, job experience and demonstrated leadership, Integrity, honesty and have been forthright in all acts and deeds.

I choose community interest over special interest and use common sense-based decision making. I am a catalyst for empowering communities, creating partnerships, resolving conflict and being a change agent. I have nationally-recognized expertise in public safety, budgeting , transportation, community-based government, personnel and auditing functions and currently represent the City of Los Angeles as a board member of the National League of Cities. I am also an inductee of the “National Civil Rights Walk of Fame” in Atlanta, Georgia.

What are your top priorities for your district? How do you plan on tackling them?

1. Fiscal solvency- The city's general fund is $4.2B and can not sustain its current payroll, pension, health care and worker compensation commitments now and in the distant future. Next fiscal year 2011/2012 the city will spend 1/4 of its general fund budget for pension and health care benefits for its employees. Healthcare has increased over 100% in the past 10 years. The only tools available to the city is to restrain expenditures, increase fees and eliminate personnel positions as over 93% of the city's budget are personnel costs. We can also initiate furlough cost-saving measures and eliminate, merge and reorganize departments. We should reduce and eliminate city service contracts and increase fees/fines to reach a full cost recovery. As Chair of the Budget and Finance Committee, I have guided the city in eliminating over $1 billion of expenditures in the past two fiscal years.

Issues impacting pension reform are: higher employee contribution and change in the pension profile, healthcare cost reduction, reducing city subsidy and shared cost by the city and the employee for future increases, continued reduction in city staff, a hiring freeze for all employees including police officers, reassessment of 70% of the city's general fund budget allocated to pubic safety service and ensuring the city revenue producing positions are protected to gain maximum return on revenue recovery.

The lack of jobs should be addressed by using city dollars to invest in the local workforce. Creating local business preferences for city contracts, local hire mandates on construction sites, city, state and federal incentives for job creation, business tax breaks for new businesses in the city and eliminate city rules and entitlement processes that unnecessarily inhibit job creation and business growth and make a concerted effort to attract all levels of business to the City of Los Angeles. An L.A. Chamber of Commerce report showed that despite our economic situation, the Eighth District leads the city in job creation.

We need to continue to identify economic development tools to stimulate and grow our communities, create zoning laws which provide a proper balance between smart growth and community and environmental needs, invest in community infrastructure, create transportation corridors and update community and specific plans. We must fight to save the CRA and its revenue, its community participation and its standards, while supporting a wide array of public and private transportation modes. Creating a housing balance that allows every level of income to work, play and live in the community is essential. It is also important to promote and use parks, libraries and schools as community centers.

Healthcare is fundamentally the most significant human right that exists. A full spectrum approach is necessary as just having a health plan is not sufficient. Healthy options of exercise, healthy food, preventive care and availability of both medical and mental health are mandatory. I favor creating walking, bike riding, exercise equipment access, farmer's market locations, options to fast-foods such as sit-down restaurants and full-service grocery stores. And, I support the opening and full use of medical and mental health clinics and producing updated resource guides to aid the community to access local services.

3. Identifying and Establishing Core Services in the City - The city must go through a complete examination of its responsibilities and duties to identify its core responsibilities versus those that should be either discontinued, shared in a public-private partnership or shared with non-profits. Otherwise, private industry must be allowed to absorb that responsibility. This will give city government an opportunity to reinvent itself while educating the public as to their expectations and creating future partnerships for future success.

How would you address the city's projected $350 million budget deficit?

Editor's note: This question was already answered by Parks in his response to the second question.

I plan to continue emphasizing my office's commitment to Prevention, Intervention and Education as it pertains to community service.

Intervention - When problems occur, the Eighth District responds to their constituents by working effectively and efficiently with city departments to ensure the best solution can be achieved.

Education - The Education Principle is never-ending, as the Eighth District works with constituents, departments, other elected offices, etc..., members of the staff are consistently giving, taking and sharing information and using it for the good of the City of Los Angeles.

In my judgment and supported by the opinion of the state's former attorney general, the conflicts between the federal and state laws on the sale of marijuana and the narrow mandates of the states' medical marijuana collective law can not be reconciled. In my professional opinion, I support the recent legislation by the Los Angeles County Board of Supervisors and many other jurisdictions throughout the State of California is to ban medical marijuana facilities. I have proposed a motion to repeal the current City of Los Angeles Ordinance.

What are your priorities for development and planning?

My priorities for development are that planning is the focal point of any real and smart development process. The creation and ongoing updating of community plans and the support of specific plans are mandatory. These procedures bring about consistency and real expectations for the community and the development community. Additionally, the city's concentration on infrastructure (e.g sewers, sidewalks, underground lighting, etc…) enhances the community and creates a more viable and desirable development opportunity. My goal for development covers the spectrum of job creation and zoning regulation to create community processes to address overconcentration issues, conditional-use processes on potential problem businesses, elimination of unnecessary entitlement delays and conflicting requirements, community hearings for design and review of projects. The goal should be to concentrate on development opportunities that enhance the community and bring the needed service and amenities.