Carpool and Bus Lanes Coming to the I-5 in Burbank 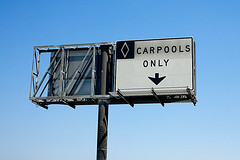 Photo by GarySe7en via the LAist Featured Photos pool on Flickr
Ground was broken yesterday on the $69.2 million project to bring new 4.4 miles in each direction of bus and carpool lanes to the Golden State (I-5) Freeway in Burbank between the Hollywood Freeway (SR-170) and the Buena Vista Street interchange.

Funded in part by the American Recovery and Reinvestment Act of 2009 ($39.3 million) and by Prop C funds ($22.6 million) from Metro, the Caltrans project is expected to be completed by fall 2014. One goal of the endeavor is to have people carpool more, and use public transit, according to Caltrans Director Cindy McKim, as well as "benefit residents, commuters, and commercial vehicles by improving mobility along Interstate 5.”

According to Caltrans, the section of the I-5 this project focuses on has an average daily traffic volume of nearly 200,000.