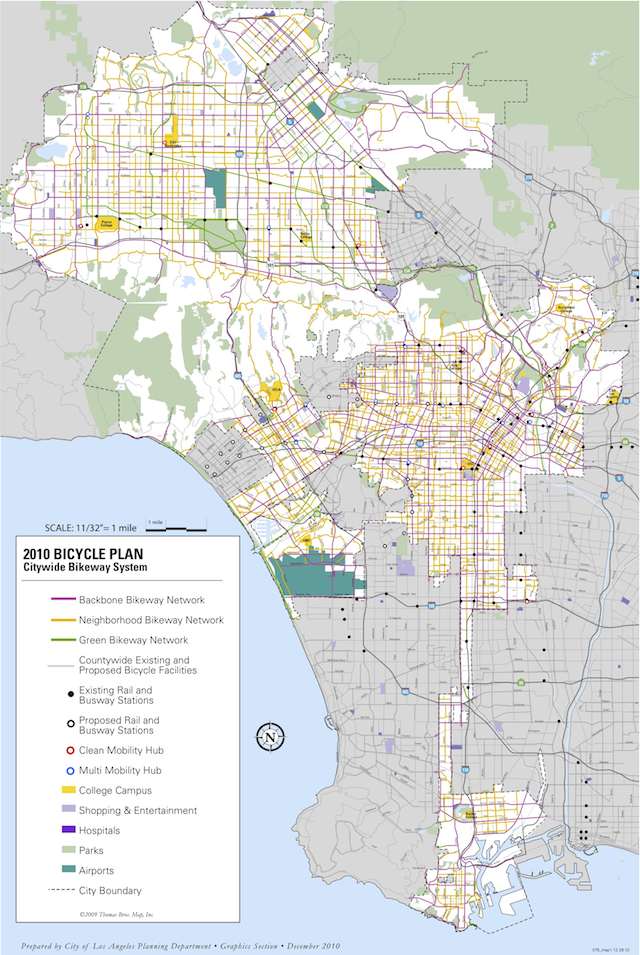 In a unanimous (12-0) vote yesterday, the Los Angeles City Council adopted the City's Bicycle Plan, which lays out 1,680 miles of interconnected bikeways and calls for more than 200 miles of new bicycle routes every five years Citywide, including along the Los Angeles River.

Several years in the works, the ambitious plan signals to many a shift in the relationship between the local government, city planners, and bicyclists. Though not a perfect solution, the Plan suffered much criticism and scrutiny during its public review phase. As for what the Plan means to Los Angeles and our bicyclists, the reaction is encouraging, but bittersweet, as evidenced by a piece published by GOOD that catalogs the significance and shortcomings of the plan as seen by members of the local bicycling community.

This morning, the Bicycle Plan is being signed and celebrated on the steps of City Hall. Among those expected to attend is Councilmember Ed P. Reyes, who has been an advocate of the Plan. In a release issued yesterday, Reyes says the plan's adoption shows that L.A. is starting to realize that the car is not necessarily number one: "[W]e're having a cultural shift toward different types of transportation. We're even looking at certain corridors where we can eliminate a lane for a car, and add a lane for a bicycle.''

The Plan aims to "close the gaps" between existing bikeways "and enhance the route by adding bike stations and other amenities, and by providing connections to buses and trains," explains the Daily News. Funding will come partially from Measure R, and could also come from Metro.