L.A. Knows What's Up With Publishing, Do You? 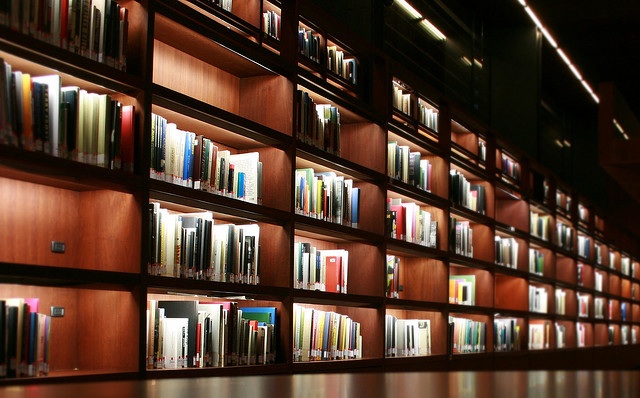 While the common adage suggests everyone has one book in them, it fails to mention that book will average 28 rejections. Or that publishing it might take as long as writing it. Nor is it even insinuated that your one book, once it’s published, will hopefully make you about $1 per book—that is, if you can sell 7,000 copies first. So yes, everyone might have one book in them, but getting it published warrants an entirely different—and perhaps less optimistic—outlook. Thankfully, this past weekend, the LA Chapter of the Women’s National Book Association made it their mission to bring some clarity to the often-murky realm of publishing. 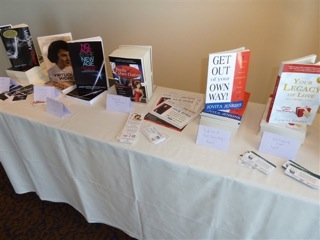 WNBA/LA Member Books. Photo by WNBA/LA
On Saturday, the WNBA/LA hosted the Bookwoman Day conference, a medley of workshops and panels on ‘How to Get Published in 2011.’

Here are some of the highlights:

E-Books Are The Books
A majority of the panelists insisted the e-book is the book in 2011. Last year, e-books made up 10% of all tradepaper sales—and with the number of books growing on Kindle, Apple, Amazon, Sony, and Barnes and Noble, that percentage is hardly idle. USA Today recently profiled e-book legend Amanda Hocking, who sold 450,000 of her e-novels in the last month alone. Bookwoman Day moderator Louise Palanker, author of the best-selling young adult book app, Journals, couldn’t be more excited about the digitalization of books. Journals has been staff-picked twice and is ever-evolving thanks to in-app content like ‘ask the author’ sections and podcasts. Palanker is convinced people want to read, no matter what the delivery system is, and she’s thrilled that digital publishing has created an unprecedented new dialogue between authors and their readers.

Authors (finally) Have Control
Mark Coker, founder of instant-publishing website Smashwords, decreed: the authors will revolt. While admitting his site might make the act of publishing “too easy,” he is convinced the instant platform responds directly to a web-driven society. And with good reason: As of Saturday, Smashwords has published 35,000 books from 14,000 authors, including e-book superstar Amanda Hocking. Coker cited Hocking’s skilled writing and low price point ($.99—$2.99 a book) as catalysts for her success. Success, he insisted, that simply couldn’t have happened had she signed with a traditional publisher. Kassia Krozser, founder of publishing site BookSquare, added that publishers are no longer competing against other publishers—they’re competing with authors. Traditional publishing affords authors 25% of 75% of the royalties made from book sales—mere pennies compared to the whole 85% offered by sites like Smashwords. And a recent LA Times article evinces big publishing houses are losing their stronghold on the business. With the ability to make more money and control the production of their books, authors have started asking: what can a publisher do that I can’t?

Publish or Perish
Once upon a time, the term ‘vanity publishing,’ outed the flagrantly wealthy, the amateur, the hack (Never mind that Gertrude Stein and other iconic authors published on vanity presses). But over the last decade, traditional publishing has grown increasingly antiquated as the world ventures farther into the digital frontier.

LA author Joan Jackson had a huge success using Amazon’s Book-Surge program (now CreateSpace) to publish her book Voluntary Chaos. Citing the full publicity package, comprehensive editing service, and the much-needed ‘hand-holding’ Amazon provided, Joan heralded the service for the freedom it gave her to oversee every aspect of her book—something most big publishers don’t allow. And WNBA board member Author Jovita Jenkins sold 10,000 copies of her self-published book, Get Out of Your Own Way, using the print-on-demand service Lightning Source. But local author Gemini Adams did caution against the allure of vanity presses. She argued they provide a quick fix, but many lack means for the marketing and exposure authors seek. Albeit more costly, Adams opted to create her own independent press imprint to publish her award winning book Your Legacy of Love. This form of hybrid publishing allotted her a great deal of production freedom and provided the mainstream exposure that accompanies more traditional forms of publishing.

Writing Is a Creative Act. Being An Author is a Job.
While the widespread availability of publishing is great news for authors, every panelist insisted your book might not survive without heavy branding and self-promotion. Utilizing Twitter, Facebook, LinkedIn, Hootsuite, and Tumblr, the new author must connect with social media. One agent cited a $500,000 advance she recently landed for a children’s book. The catch, she quipped, was that the author already had an enormous fan-base, which meant a guaranteed audience for the publishers. In fact, most of the panelists insisted this new era of books means authors are best served to see their trade as a business and to see themselves as true entrepreneurs.

While some argue this is all great news for the future of book writing and publishing, some still worry the digitalization of books signals the end of the business. And with the heavy focus on self image and branding, it’s hard not to wonder: does this mark the end of writing for writing’s sake—is the new digitally-minded author concerned more with profit than ideals? 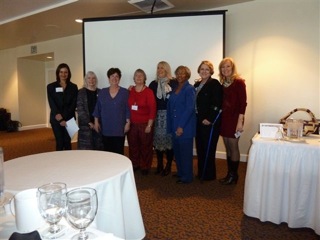 WNBA/LA Board MembersPhoto by WNBA/LA
Bookwoman Day provided a great platform to discuss the future of books and the evolving role of the author. This year marked the WNBA’s first publishing conference and judging from the success, it will likely not be the last. The LA chapter of the WNBA is committed to literary causes throughout the city by providing authors, writers and book-lovers a supportive network and national exposure. In addition to hosting member reading series, bestowing nationally recognized awards, and organizing forward-thinking conferences, they contribute charitably to local libraries, schools, and literacy efforts.

When I asked WNBA/LA president Michelle Gilstrap what she hoped participants took away from the publishing conference, she responded frankly, “That you can do it.” And it seems that is the new mantra of publishing, precisely.

For more information on WNBA/LA be sure to visit their website.

Want to weigh in on the future of publishing and digital books? Lend us your insight below.