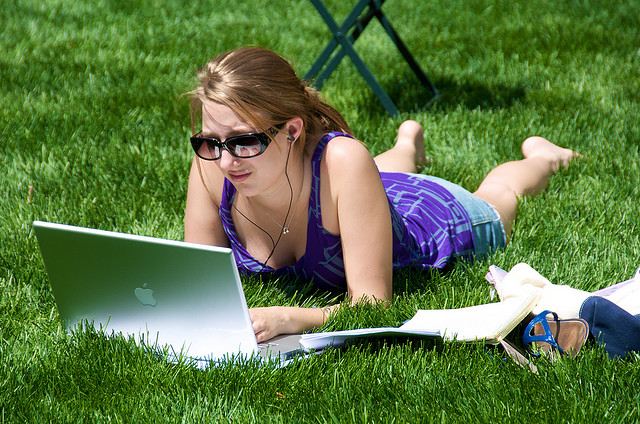 Is she writing the next great Los Angeles novel? (Photo by Ed Yourdon via Flickr)

This Saturday, the LA Chapter of the Woman's National Book Association is hosting Bookwoman Day, an all-day writing conference at the Marina del Rey Hotel. The event will provide a meeting ground for local publishers, literary agents, and book gurus to discuss various ways on "How to Get Published in 2011."

The Bookwoman Day schedule boasts a wealth of workshops on how to publish your book and how to gain access to publishing resources in LA, online, and beyond. Workshops include information on branding your book for the right audience, self-publishing and promotion, scoring an agent, and the future of book publishing via digital mediums like E-books and apps.

There are several highlights of the day’s events, including a workshop moderated by three social media and communications experts on book promotion and the use of social media platforms, and an afternoon workshop that brings together literary agents and Hollywood Producers to discuss the 2011 book market. And for many writers, the lunch workshop will provide an invaluable opportunity to pitch their books to agents and producers.

The event should serve in facilitating important discussions on the author in the digital age, new ways in which writers can connect with audiences and reach new readers, and the place of the book in a world enamored with the computer screen. Plus, the wealth of local moderators should lend keen insight into LA literary efforts.

Tickets are $95 for members and $135 for non-members, with WNBA membership included. Book pitches run $10-$30 depending on how many pitches you intend to make. Funds go to the WNBA to promote female authors, literacy, and the importance of women in the book community. And if you can’t make it, be sure to check out their website for more on the WNBA and their efforts to promote literary equality, both in LA and throughout the US.