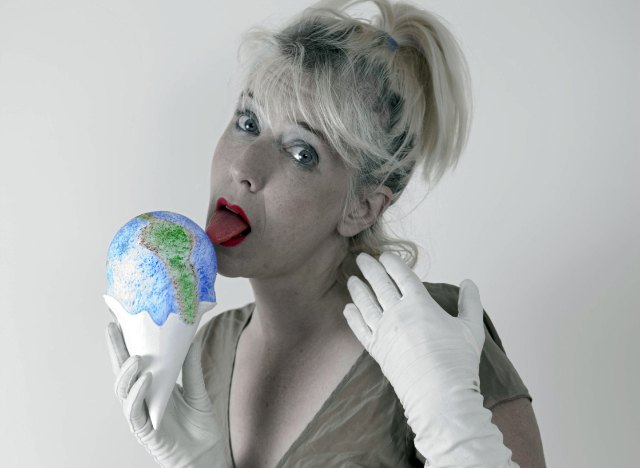 Heather Woodbury in 'As The Globe Warms.' | Photo: Phil Norwich

Two things writer/performer Heather Woodbury doesn’t lack are talent and ambition. Her 1996 solo play What Ever was ten hours long and featured 100 characters, all of which she performed (often as several characters in conversation with each other), and it was described by the New York Times as “a masterwork of the solo form.” Her ensemble play Tale of 2Cities: An American Joyride on Multiple Tracks won a 2007 Obie for performance, and Woodbury was the recipient of the inaugural Spalding Gray award, which recognizes “fearless innovators” who “fully realize the writing/performing aspects of Gray’s legacy.”

Her current project, As the Globe Warms, is no less impressive of an undertaking. It’s a multi-character solo serial written week to week, performed live in Los Angeles, then posted online for a global audience. The story concerns ecology, Christianity and the Internet, among other things. Woodbury is now an expert innovator at this type of theatre, but she was initially inspired by the converging worlds of punk rock and performance art she encountered when she moved to New York City at 17.

“I realized I could fuse these two ideas,” says Woodbury, “of wanting to write the Great American Novel and what I loved about theatre, in this world where all you needed was a microphone and a light bulb, and you could get a gig. A friend of mine dared me and said, ‘You’re a person who has too many ideas, you should do a show every week for nine months and see what comes out of you.’ I initially just thought I’d do these 30-minute performance art pieces in the back of a bar for a month, but I sort of tricked myself into a narrative. That’s when I discovered a form that I loved and would never stop exploring.”

Woodbury called the results (What Ever) a performance novel, “maximal storytelling with minimal shoestring production, so it celebrates the story more.” Although Tale was developed in the same way, it was also staged as an ensemble piece. Globe, in its current incarnation, is a solo work. Woodbury admits that both formats have positives and negatives.

“A downside of doing a one-person show,” she says, “is the cliché that a lot of people have in their mind of what a one-person show is. First of all, a lot of solo work is autobiographical, and mine isn’t. It’s fictional. And then it’s just lonely. Doing [Tale] as an ensemble, as a writer, it was really satisfying. As a [member of the cast], I enjoyed it, but it was, like, ‘That’s it?’ I remember at a certain point of the run in New York thinking, ‘All right, this is getting a little bit dull.’ I’ve never been able to figure out if I write because I want to perform or if I perform because I want to write. They’re intertwined. I like the challenge of solo work, where even remembering all your lines is a challenge.”

“I like this public development process,” Woodbury continues, “which I really want to stress is not me workshopping something in front of people. It is a work-in-progress, but it’s an art form in and of itself, which is the raw formance of something week by week in front of a live audience, and in front of an online audience too, now.” When asked what the inspirations for Globe are, Woodbury acknowledges sources both big and small.

“I was talking to a friend of mine who’s an ecologist, and she was saying how she’s drawn to this new environmental art, which generally has visual artists doing it. She was saying there have to be advocates for the environmental cause who aren’t only scientists or lawyers or professional political activists. I always think there should be art about things that matter in the world. It shouldn’t just be consigned to the world of concrete ideas, it has to be in the world of the imagination and poetry and the ineffable emotional things that we can’t articulate any other way. One impetus was these little frogs I read about in a book about global warming that are gone now. Just looking at that photograph of the frog and realizing it doesn’t exist anymore.”

“I often start with things that really bother me,” continues Woodbury, “or emotions that are really complex, impossible to articulate in an essay. So then I start musing on them and collecting images and characters that accrue around meditating upon a particular theme. The more science I read, the more disturbed I became by what’s going on with the destruction of our habitat and the habitat of so many other critters. And the comedy of human beings continuing to have their politics and soap opera with each other as the globe warms. The idea of fiddling while Rome burns. Entertainment can be serious. I just feel that [this] is a way I can throw myself wholeheartedly into a cause that I care about very much and articulate it in a way that was more satisfying to me than perhaps going on a march in Washington, D.C.”

After the current incarnation of Globe concludes on April 5th, Woodbury says she intends to edit and refine the show and take it to other theaters and festivals. She also would like to perform excerpts at churches and scientific gatherings to start a dialogue about the play’s issues. If you want to see a brilliant artist at work, there are four more episodes happening in the next month before the finale. All of the previous episodes are available at www.heatherwoodbury.com, but there’s no substitute for seeing a piece done live.

“I’d like to encourage people to come and see it,” says Woodbury, “even though [it’s the middle of] a narrative. My work is very much about little slices of life, where the whole story is told within that one little moment. If [you] want to see one [episode], or get hooked on the rest of the tale, come check it out, this is happening in your town. Come out and see it live. It’s history in the making.”