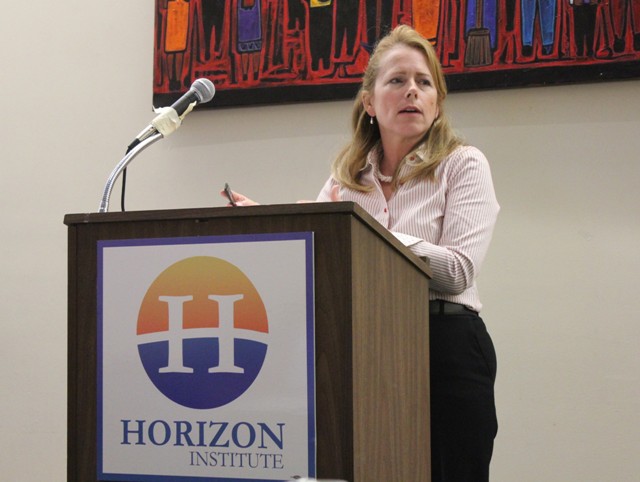 Jean Ross, Executive Director of the California Budget Project, began the event with a broad overview of Governor Brown’s proposed budget. The Governor’s proposal fills the $25 billion deficit with roughly equal measures of spending cuts and new revenues. Ross explains that “the cuts are so ugly” partly because Brown’s budget uses less tricks and gimmicks than seen in recent budgets. Not one prone to hyperbole, she stated, “The cuts that the governor has put on the table, if they are implemented, people will literally die.”
Sensing many in the audience are hoping to find alternatives to the devastating cuts, Ross warned that the conventional wisdom to get voter approval is “to swap cuts for cuts, or revenues for revenues. You can’t swamp out the elimination of redevelopment for a tax increase.”

One part of the budget that is spared significant cuts is K-12 education. Ross predicts that if voters fail to approve Brown’s proposed tax extensions, however, the next cuts will come from schools. She believes that if the tax increase doesn’t get approved, the list of things to be cut “will get even uglier.”

In the 20+ years Ross has been following the budget process in Sacramento, she says there is a “whole different vibe” in the capital. “The best thing I can say about the Governor’s proposed budget is that it buys some time. There is an incredible level of budget crisis fatigue among policy types, legislatures, people at all levels of government, and people that depend on public services,” Ross said. “We need to get the patient stabilized, do some long-term planning, and have an honest conversation between our elected leaders and Californians more broadly about what we want from government.”

Bringing an academic perspective to the discussion was Dr. Dylan Roby of the UCLA School of Public Health. Proposed cuts to Medi-Cal and the Healthy Families program outlined by Professor Roby included increased premiums and copayments, the elimination of Adult Day Health Care and over-the-counter drug benefits, visit and prescription drug caps for Medi-Cal recipients, reductions to In-Home Supportive Services, and the elimination of vision services for Healthy Families children.

Professor Roby explained that the Governor faces a bad situation and there are significant limits on his ability to be creative. He explained that while some of the changes make sense, other cuts appear to be counter-intuitive. “It seems like we are going in the wrong direction a little bit in that we would be weakening the Medicaid program prior to then growing it in 2014.” He expressed concern that by enacting a ten visit cap, chronically ill patients will experience a decline in health and the pent-up demand will end up costing the state significantly more in the future when patients are covered as required by the Patient Protection and Affordable Care Act. Roby is also concerned that Brown’s plan leaves federal matching funds on the table and increases demand for more expensive services as a substitute for reduced services.

A key feature of Brown’s budget is shifting responsibilities and services from Sacramento to the local level. Horizon Institute Executive Director Barbara Maynard explained that the budget will transfer $5.9 billion in programs from the state to counties, with Los Angeles County accounting for $1.4 billion of this transfer. Focusing on public safety realignment, Maynard explained that 37,000 non-violent, non-serious, and non-sex offenders would be transferred to county responsibility.

The realignment would lead to 13,550 felons being added to Los Angeles County jails in the next five years. With Sheriff’s jails already crowded, there may be early releases. The Sheriff’s Department has recommended expanding the Electronic Monitoring Program, reopening closed jail beds, and “to be given the authority and latitude regarding releasing of inmates to parole.”

Another component of the proposal is to shift $741 million to Counties for supervision of all adult paroles which will add 30,000 parolees to Los Angeles County responsibility. Throughout her presentation, Maynard emphasized that while there are still a lot of questions to be answered, there are both risks and opportunities. “If this is jammed through and becomes part of the budget, a lot of this is going to be worked out on the fly. But there are opportunities here.”