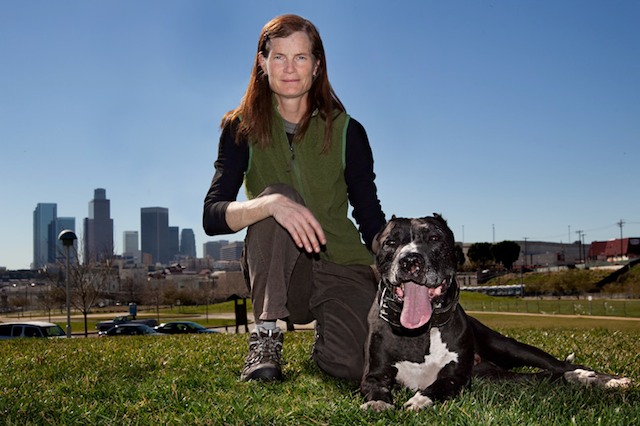 By Nick F. Carranza/Special to LAist

It takes patience to really understand our friends and families, and it takes kindness to understand a stranger. There are many variables involved in one's thought process, and in Compton, those variables aren't always obvious. Nobody knows that more than Lori Weise, founder of the Los Angeles non-profit group Downtown Dog Rescue (DDR).

For the past 10 years Weise, with the help of community activists, has personally been going block-by-block in the city of Compton, making friends and getting acquainted with who she calls "her people." At 5'9" and 110 pounds, with fair freckled skin and blue eyes, Weise's presence is certainly pronounced to the mostly Latino and African-American community, but some might say she's gained as much "street-cred" as anyone who might have grown up in the neighborhood.

Weise's credibility and well-earned trust has been the key ingredient in helping her make a real impact in the city of Compton. Weise's approach to dog rescue is like no other. Like all rescues, she hosts her share of adoption events, but the story doesn't end there. Weise is as much involved with people as she is with dogs. Focusing on communities with few resources, the homeless, and the youth, DDR focuses on long term strategies in everything they do. Programs like Operation Safety Net offer pet owners solutions to keeping their pet rather than surrendering them into the South L.A. Animal Shelter, where more likely than not, they'll be put to sleep. Operation Safety Net offers low income pet owners everything from free medical treatments to more labor intense fence building, truly rescuing not only a dog's life, but in most cases a family bond, and of course saves the City of L.A. thousands of dollars, and several man hours each year. The same helping hand is lent with no prejudice to many of the homeless dog owners you may drive by everyday.

To Weise's dismay, she's been embraced as the "Pitbull Lady," since most of the dogs she deals with end up being pitbulls. "I'm a dog rescue, not a pitbull rescue" Weise says with a bankrupt poker face, her smile tells the real story. Weise has a real soft spot for the pitbull breed, like a pitbull guardian angel, Weise is providing the breed a second chance, and an opportunity to prove there's more to a pitbull than what you see on T.V.

It's no secret that pitbulls are often profiled for attacks on humans and other dogs. Like all breeds, pitbulls have their own characteristics and energy levels. Accompanied by mastiffs, German shepherds, rottweilers and even labradors, pitbulls are naturally very strong, loyal, and energetic dogs, but in the wrong hands, like any other large breed, can be deadly. Ask Clancy, Weise's 13 year old pitbull, just one of 30 dogs Lori tends to before, during and after work. As C.O.O. of the Los Angeles contemporary furniture company Modernica, the dogs help Weise balance her life, as much as she's helped balance theirs.

Clancy, after more than 10 years of fighting, was left to die in the streets of South L.A. Clancy's over clipped, and now non-existent ears, broken teeth, torn lips, and scarred face tell a tale of a miserable life of horror and torture. Now fully rehabilitated, accompanied by Weise, Clancy is often the star attraction at many South L.A. youth events and has even visited South L.A. elementary schools. Like a proud and decorated war veteran, Clancy dons a red vest with the words "pet me, i'm friendly" written across it. 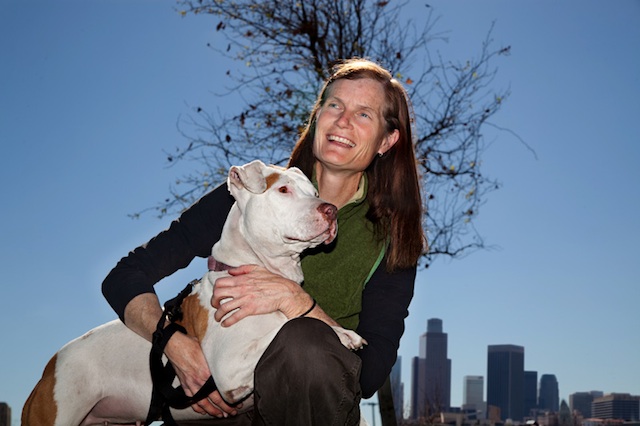 As a responsible dog owner, channeling energy plays a hefty role in your dog's character and overall behavior. With the help of on-staff trainers, DDR offers classes to help all pet owners (not just pitbull owners) identify the characteristics of their breed, through exercise, and training. The classes play a vital role in maintaining a healthy, balanced and long-lasting pet/owner relationship. This class has mandatory owner participation, so bring your running shoes.

No good deed goes unrewarded: In January, DDR qualified 10 dogs, 8 of which were pitbulls, to be nationally recognized by the American Kennel Club's Canine Good Citizen (CGC) program, The CGC is a two-part program that stresses responsible pet ownership for owners and basic good manners for dogs. The test itself is a 10 part behavior, agility, tracking and performance test. It's not your standard, sit, stay, roll over routine, but nobody's deducting points for an old fashioned "gimme 5." The encouraging words "never too late" speaks volumes, as Clancy at age 12 passed his C.G.C. with flying colors. Considering his previous misfortune, insert standing ovation here! As we rapidly fly through 2011, DDR hopes to assist in certifying 100 South L.A. dogs with their C.G.C. licenses.

In addition to the training, you can find DDR every second Sunday of the month in Compton at their spay/neuter clinic. Some of "Lori's People" find it very difficult to neuter a dog. Whether it be for financial reasons, old fashioned stereotypes, or a sense of degradation keeping them from getting their dogs neutered, somehow Lori gets through to the community, and the results are phenomenal. In 2010, DDR was responsible for spaying and neutering over 700 dogs in Compton alone. Owners not ready to spay or neuter can come and get training tips, as well as free food and treats. "It's all about the people, and when they're ready, we'll be here, just like we have been for 4 years," says Weise.

There is a lot to admire about Lori Weise and Downtown Dog Rescue. The method, the compassion, and the intelligence are all valid points, but sheer guts and kindness seem to be the common thread that make Weise and D.D.R. leaders of the pack.