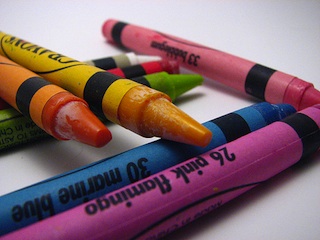 Photo by albastrica mititica via Flickr
6-year-old Jack Dorman was placed on a psychiatric hold after he drew what school officials say was a "disturbing picture" that expressed a wish to die, according to NBCLA. The student at the LAUSD's Taper Avenue Elementary in San Pedro was evaluated by the Los Angeles County Department of Mental Health Psychiatric Mobile Response Team, who determined the child was at risk of harming himself, and placed him on a 72-hour psych hold.

Dorman's mother, Syndi, is outraged at the school's response to her child's drawing. She explains that Jack had not wanted to go to school that day because his father was being deployed to Iraq, and wanted to spend time with his parents. She also adds that the drawing was an image from one of the video games her son plays. Jack suffers from separation anxiety, and had been seeing a therapist.

{W]e can confirm that our team of evaluators thoroughly investigates these reports before taking any action. We carefully and deliberately evaluate all situations, acting only when the circumstances warrant.

We want to reassure the community that the evaluation of a minor for suicide risk and possible hospitalization is completed in a collaborative manner with school personnel, mental health providers and parents.

Syndi Dorman, however, told school officials she would rather take her son out of school and to see his regular therapist. They denied her request, telling her the ambulance was there, and he was going to be placed on a psych hold.

Dorman says her son was "traumatized" by the experience, and though she was able to pick him up after 48 hours, he is now scared of his school. "He's afraid they're going to take him away again," says his mother.

*This story was updated to attribute NBC Los Angeles, who originally ran this story, which was subsequently used without attribution by KTLA.