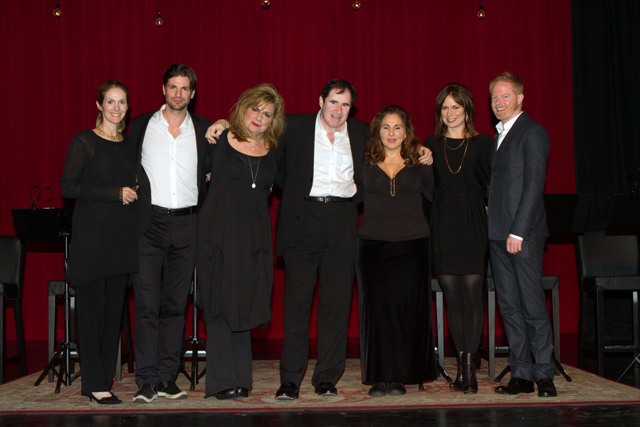 Standing on Ceremony: The Gay Marriage Plays is an event that could only happen in a city like Los Angeles. Since Dec. 6, this weekly performance at Largo at the Coronet has combined the talents of actors and playwrights to shine a spotlight on the issue of marriage equality. The writing is compelling, thought-provoking, humorous and relatable—regardless of one's background.

LAist caught up with producers Stuart Ross and Joan Stein (a Tony Award winner) to learn more about this important and entertaining event.

LAist: How has Standing on Ceremony evolved since the early performances in New York and North Hollywood?

Joan Stein: The show has evolved from its origins as a benefit into a play that explores the universal emotional challenges in all relationships while still maintaining its political mission of marriage equality. The evening is now crafted for seven actors playing all the parts in nine plays as opposed to 30-35 actors in 12-15 plays, as it was with the benefits.

How did you pull together all these amazing actors and playwrights? Is it the kind of production where more and more people have joined the cast thanks to word of mouth?

Stuart Ross: The artists actually want to be involved in this civil rights struggle. We are getting great actors because we have great writers. Word of mouth has definitely had a great deal to do with our being able to get truly brilliant actors to perform the show. It seems that they all want to come back. They also have been very gracious about telling us about colleagues who would be a perfect fit with the show. 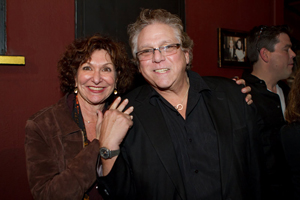 Standing on Ceremony Producers Joan Stein and Stuart Ross / Photo by Chuck Green
What have been some of the most positive results or reactions that have come out of the shows thus far?

Stein: We've been able to use a great piece of theater to open people's minds, reduce their fears and create the space to have a conversation about courage and equality in a way that is sorely needed.

Ross: KCRW's Michael Silverblatt saw the show and remarked: "Standing on Ceremony is an evening's anthology of plays about gay marriage. The plays approach the subject with a surprising delicacy and obliquity, startling me into emotional responses I didn't know I had. I would find myself moved to sudden laughter or astonished tears. Why? Because the plays presented as actual, something that is still only a dream. The dream of equality is one of the dearest dreams we share. Theater asks us to believe in dreams come true, and this is an evening of wonderful dreams."

Each Standing on Ceremony event looks at the issue of gay marriage from many sides. What is one fresh perspective you've appreciated or discovered as you've produced these plays?

Stein: The courage it takes to be in a relationship, any relationship, is universal. The feelings we share and the challenges we overcome are not limited to sexual preference.

Would you please share one or two of your favorite moments from the recent Largo shows?

Ross: Seeing people in the audience like Diane Olson and Robin Tyler, whose challenge to California's law denying same-sex couples the right to marry ultimately led to the state's Supreme Court ruling against it.

The audience is often as star-studded as the cast: Carl Reiner, RuPaul, Helen Hunt, Lily Tomlin and Jennifer Aniston have all seen the show and loved it. Sitting in the audience and hearing the tidal waves of laughter, and the genuine emotional reactions to the more dramatic plays, is exciting and surprising every week. 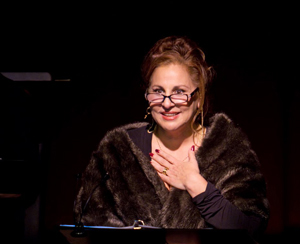 Ross: It's a beautiful theater with such a history of amazing American dramas, including such great social commentary productions as the West Coast premiere of Thornton Wilder's The Skin of Our Teeth with Tallulah Bankhead, and the American premiere of Bertolt Brecht's Galileo starring Charles Laughton.

Largo has an energized feeling that adds excitement to the experience. It gives off a vibe that is as edgy and electric, while remaining classy. It lets the audience know that they're in for something special.

Are there any plans to broadcast future shows?

Ross: That would be great. People are starting to approach us about film and television but we are still growing and think we should wait to make any commitments until the show as reached its full artistic and social potential.

Throughout the years, you've been a fixture on the LA theater scene. What makes the arts community in LA so special?

Stein: Actors and writers are moving back and forth between theater, film and television with greater ease than ever. The available talent pool in the arts community of Los Angeles has expanded exponentially and provides a unique opportunity to have fantastic actors of extremely high caliber involved.

Don’t miss Standing on Ceremony: The Gay Marriage Plays Monday night (Feb. 7) at Largo at the Coronet. Tickets may be purchased here, and a portion of the ticket sale proceeds will benefit the American Foundation for Equal Rights.