Taco Bell Lawsuit: What Do You Mean It's Not All Beef? 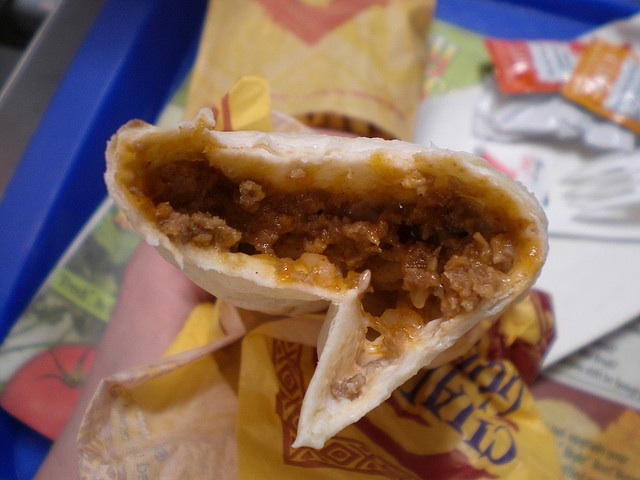 Where's the beef in this Taco Bell Cheesy Beef Melt? (Photo by Like_the_Grand_Canyon via Flickr)

In an era when advertising is based on honesty, and the fast food industry prides itself on serving only the highest-quality fresh ingredients in their thoughtfully prepared dishes, it is nothing short of shocking that OC-based Mexicasual giant Taco Bell has been slapped with a lawsuit alleging they're lying when they say their food uses "seasoned ground beef" or "seasoned beef."

The lawsuit is as legit as our sarcasm, and was just filed in U.S. District Court in the Central District, Southern Division, in Santa Ana by Montgomery, Ala.-based law firm Beasley, Allen, Crow, Methvin, Portis & Miles, P.C. on behalf of plaintiff Amanda Obney of California, according to the OC Register. It is a class action lawsuit that "charges that Taco Bell's meat mixture contains binders and extenders and does not meet the minimum requirements set by the U.S. Department of Agriculture to be labeled as beef," explains USA Today.

Okay, so if the beef's in your taco, what's the beef, exactly? Well, these are the ingredients, per Taco Bell:

Never mind that in general, no one should be eating that (remember Jamie Oliver's advice on what to buy? He told us "if you could give one second to look at the back of the pack, and if it looks like a NASA science lesson, don’t buy it") but it's not stopping Taco Bell from making, serving, or selling their beefy products that this suit is about. The suit does not seek any monetary damages, but rather what could be a nobler cause: The truth. According to an attorney on the case, the suit "asks that Taco Bell be honest in its advertising."

"Taco Bell prides itself on serving high quality Mexican inspired food with great value. We’re happy that the millions of customers we serve every week agree. We deny our advertising is misleading in any way and we intend to vigorously defend the suit.”