TV Junkie: Golden Globes - How Our Picks Stacked Up 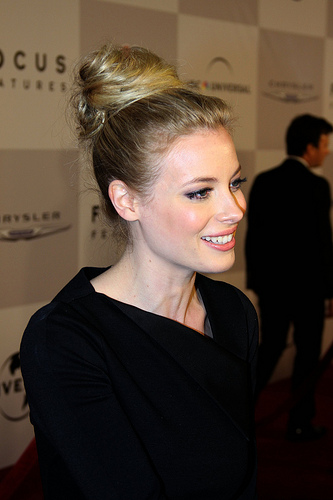 Gillian Jacobs from NBC's "Community" at the NBC post-Golden Globes party at the Beverly Hilton last night [Thomas Attila Lewis]
We looked at our tally sheet after the Golden Globes last night and we didn't do so well again this year. This probably means we need to drink more Campari or Lillet Blanc so we can be on the same page with the Hollywood Foreign Press Association. If you look at our post from yesterday, our logic was well-defended on most of all the categories we missed with one or two exceptions, those being the winners from "Glee," which even the most hardcore fans will admit, did not have a strong season.

We scored 2 out of 10 or 4 out of 10 if you include our alternates. We did better with the SAG Awards, Oscars, and Emmys last year so we hope to hone our answers even better this year.

What did you think of the winners? Tell us in the comments. Generally we're very happy for all the winners and there were some surprising nominees who deserved the attention: Thomas Jane, "The Walking Dead," and more.

The Golden Globes delivered on the party atmosphere, as promised, and the lobby was a veritable crush of the top talent from around the world. We don't think we stepped on anyone's feet this time, but we bumped into almost everybody that you saw on your TV screens with the exception of the night's host, Ricky Gervais, who was curiously absent for almost the entire 2nd half of the program. The lack of Gervais was conspicuous to the point of people assuming that he was actively being censored by NBC.

Gervais didn't turn up at the NBC/Universal post-Golden Globes party that we were stationed at which was a bit subdued, perhaps because of NBC's nominees being universally passed over for awards. This doesn't mean people weren't having a good time or weren't happy to be at the event, but winners carrying trophies into a party tent tend to bring a communicable energy. To see how our night at the Golden Globes unfolded, page back through our live Twitter stream.

Perhaps our most exciting moment of the night was meeting Kurt Sutter, creator and showrunner of FX's "Sons of Anarchy," and congratulating him and Katey Sagal for winning the Golden Globe for Best Performance by an Actress in a Television Series - Drama. We've been big supporters of "Sons of Anarchy" from the very first episode and we hope this win heralds an industry-wide recognition for this uncompromising and innovative program.

We appreciated the opportunity to attend the event but we wonder what next year will be like if the Golden Globes payola lawsuit goes forward and if Ricky Gervais refuses to sign on to host a show that squirrels him away for half the time.

Best Performance by an Actor in a Television Series - Musical or Comedy: Jim Parsons for "The Big Bang Theory"
Alec Baldwin for "30 Rock" - The TV Junkie Pick: Should Win/Will Win

Best Performance by an Actor in a Supporting Role in a Series, Mini-Series or Motion Picture Made for Television: Chris Colfer for "Glee"
Eric Stonestreet for "Modern Family" - The TV Junkie Pick: Should Win/Will Win

8:00pm How I Met Your Mother CBS - While on a trip to Minnesota, Ted and Barney try anything to make Marshall laugh; Marshall runs into an old nemesis from high school.

8:00pm Chuck NBC - Chuck tries to create a romantic getaway for Sarah while tracking down a nanochip at a French vineyard; Lester asks Big Mike for love advice.

9:00pm The Cape NBC - Max and the crew are threatened when a former friend comes to town; Dana encounters Palm City's corruption