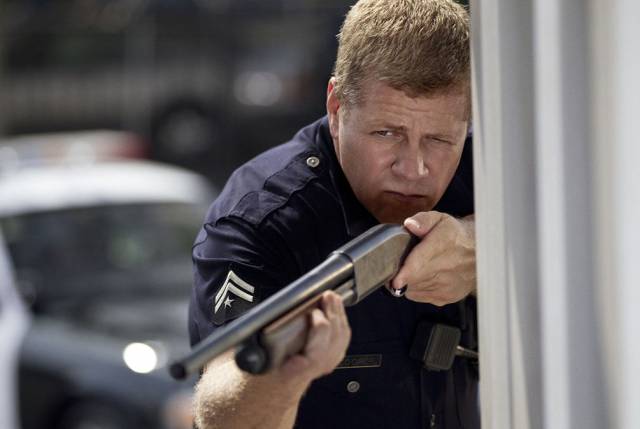 Michael Cudlitz stars as Officer John Cooper in "SouthLAnd" which will have its season premiere tomorrow night at 10pm on TNT.

We've been a huge fan of Michael Cudlitz since his performance as Sgt. Denver "Bull" Randleman in HBO's "Band of Brothers" but we know a lot of people will remember him for his roles as Tony Miller in "Beverly Hills, 90210" or Frank Rogers in "Standoff" among many others. If there is a core to TNT's "SouthLAnd," it is Cudlitz's character, Officer John Cooper, who embodies the show: steadfast in his devotion to his job and the force, yet conflicted, flawed, and very real, just like the streets of Los Angeles the show is shot on.

"SouthLAnd" is a show we've written about since its first episode during its ill-fated run on NBC. It simply is the best cop show we've seen in years and certainly the best LA-based cop show in a couple decades. This show is constantly moving, like a shark, with these patrol cops on the streets, real Los Angeles locations, from one scene to another. Cudlitz's Cooper knows these streets better than anybody and he knows what it means to be the most effective cop on the streets. That's why rookie patrolman Ben Sherman, played by Ben McKenzie, is assigned to Cooper's patrol car, to learn the ropes from the best guy at the station.

Tomorrow's season premiere (10pm on TNT) starts off at a sprint and doesn't stop. Perhaps only a few months have passed in the timeline of the characters since TNT aired the remainder of last season earlier this year. Without giving too much away, the patrol officers need to team up quickly in order to assist a downed officer and the detectives have to employ some questionable tactics in order to bring a murder suspect in. It's a great kickoff to a season that's looks really good from the 3 episodes we've seen so far.

Cudlitz shared more details about the new season with us in the interview below. Also be sure to check out our recent interview with his co-stars Regina King and Ben McKenzie.

LAist: Have there been any real differences for you on the production side after moving from NBC to TNT?

Michael Cudlitz: No, not really. The show is something that is so familiar to us, in a good way, that we were able to just jump right back into it. We'd been away for a year, which is a really long time to be away from a show. But everybody was so excited about doing the show, after being devastated by being taken out of production, to be back was so thrilling for everybody, everyone just put everything they had into it. We knew we had one more shot at this, we finally had a home that loves us, and we're going to get to shoot a whole season, with a beginning, a middle and an end. We finally got to shoot our first episode 7 of a season, which we had never done before, and we couldn't be happier.

LAist: It seems like everything that made the show great in its original inception, is still there. You guys are on the real street, the reality of the program is so powerful, it's definitely not "Nash Bridges."

Michael Cudlitz: No, it's not - but there's room for "Nash Bridges"! Let's not kid ourselves, sometimes we want to sit down and not have to think and that's provided by a lot of those shows. We're definitely in your face, on the street, gritty, raw, and all those things. I don't think any of those things were lost since the last time we were shooting. As a matter of fact, I think we're more focused this year, the stories are going to revolve mainly through the eyes of myself, Regina, Ben, and Shawn, but having said that, we haven't lost any of the characters that everybody loves, everyone is still around. It's going to feel exactly like the same show but maybe a little more exciting and a little more aggressive, actually.

LAist: In the season premiere, the show has a running start, there's no refocusing, no refractory period, no reintroduction.

Michael Cudlitz: [Laughs] That's our show - we get going from the start. You're talking about a show that on two other occasions replaced regular partners and provided no explanation - but that's how the [police] department works . I think the show doesn't cater to the fact that somebody might not be up to speed. Well, you know what? Get up to speed! I think that's an inspiring thing for an audience member, because I think you do get up to speed, I think you do realize what's happening, and you go: "Oh, I'd better sit down and pay attention."

LAist: I've been following you on Twitter for over a year now, and it's been interesting watching you keep this steady drumbeat about the show, finding articles and posts about "SouthLAnd" and your castmates. Your campaign has certainly kept me energized about the return of the show.

Michael Cudlitz: That's great to hear because that's the goal. What I've found interesting is keeping that balance, trying to mention the show, trying to keep it fresh, but not bashing people over the head with it. I don't want to turn people off by only tweeting about "SouthLAnd." There's been a little bit of a learning curve, knowing when to back off, identifying something worth retweeting, and so forth. I think the fans have really helped me through this, trying to find a balance and getting the information that people want.

LAist: In portraying Officer John Cooper, a dedicated officer with a medical condition and a substance abuse problem, how did you research these issues? Have you thrown your back out in real life?

Michael Cudlitz: I actually have. When I was younger, I used to throw out my back a lot. My father had a really bad back when I was growing up. I'd see his back go out on him just in the middle of a conversation, when he raised his arm the wrong way, I've witnessed that. The substance abuse is something I never had hands-on experience and we're kind of having our own thing going on with the show because he's not yet at the point where the audience knows he's addicted. At this point he's taking painkillers for a reason but as the season goes on, we have to ask if he is taking them because of back problem or is it becoming an abuse issue? As we start out the season, we know his prescription is running out and he's subsidizing his prescription through his dealers, but like any good addict, he doesn't think he has a problem. It's going to be nice to see that story unfold and his other issues, his family past, his relationship with his ex-wife and his future relationships with other partners.

Everything is going on all at once and for me, it's been such a gift to play him, because he is such a car wreck in so many ways. He is so.... uh... lovable? [Laughs] When I first read the script I could see how hard he was on Ben, he's pretty aggressive, he takes his work very seriously, and he has very strong opinions on many things. I thought he could sort of be a ["NYPD Blue"'s Andy] Sipowicz if Sipowicz worked in modern-day Los Angeles. I've always been a huge Dennis Frantz fan. I thought if I could capture just a little bit of that likeability and still have him be a mess, we're going to be all right, because people are going to love to see him go through all the crap he's going to go through. And whether they agree with him or not, they will, at least, understand. It's been awesome.

LAist: To have a character like John, who is such a dedicated cop, have to score drugs from a dealer in the bathroom of a bar, shows what a conflicted and complex man he is. He's extreme. He's like a freakin' machine when you guys are in the cruiser!

LAist: Was there an episode that you really looked forward to shooting this season? Perhaps a location or a specific scene you could highlight for us.

Michael Cudlitz: We just shot this [a couple weeks ago] in the desert. John is dealing with some major issues in his personal history. It was just myself out in the desert, an amazing amazing location. Something happens out in the desert, something that the fans will be really surprised at.

I do want to say that this group of actors is phenomenal. We've also been given the gift of so many amazing guest stars that get hired on the show. Scenes on the show tend to be no more than 2 1/2 or 3 pages, so a lot of these people are just in and out, but they do such a phenomenal job.

C. Thomas Howell comes back as a sober Dewey who is almost more annoying than a drunk Dewey. He's just trying to convert everybody and everything he sees. I get stuck in a car with him for a little while trying to get him up to speed. We have a great scene with a Mariachi band. There's so much. Every episode, I look through the script and can see that every scene is so good, it's such a pleasure to be a part of this.

The season premiere of "SouthLAnd" airs at 10pm tomorrow night on TNT.