How to Say Goodbye to LA: Giant Dear John Billboards 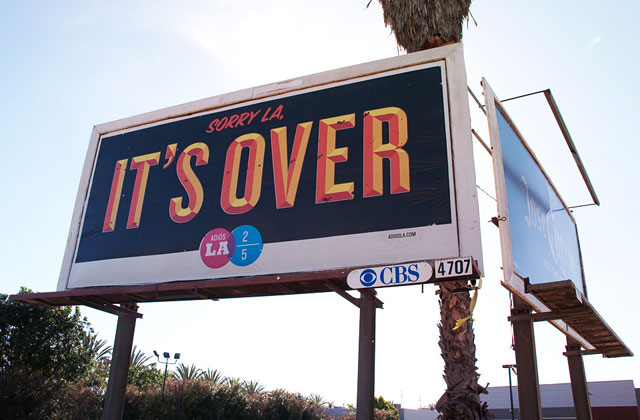 Jon Jackson is moving to New York and he'll miss Los Angeles a lot. Certain streets in particular. So how does a Creative Director say goodbye to LA? With huge billboards, an online tracking campaign and an iPhone wallpaper offering, of course.

Jackson has designed several billboards documenting his break-up with Los Angeles. Taglines include: "I Love You LA. I'm Just Not In Love With You" and "Los Angeles, I Think We Need to See Other Cities." You can view the artwork on Jackson's site and check out other in-situ photos at Curbed LA.

The artwork went up a week ago and folks are starting to ask more questions ("what's up with these boards and who is behind them?") after the initial announcement. Since the url to the Adios LA site is uber tiny and difficult to see as you whiz past the billboards while driving, we thought you'd want to know. And now: you know.

Up until January 15th, you can use the site to track Jackson's Dear John letters to Los Angeles and seek out billboards on Lincoln Blvd, Highland Ave, Olympic Blvd, Venice Blvd and Beverly Blvd. You can also check out the designs that didn't make his self-directed public art installation cut and download your favorite street's billboard as wallpaper for your iPhone.

No details have been shared on the cost to stage such an elaborate goodbye.