Food Trucks Have a New First Fridays Home in Venice 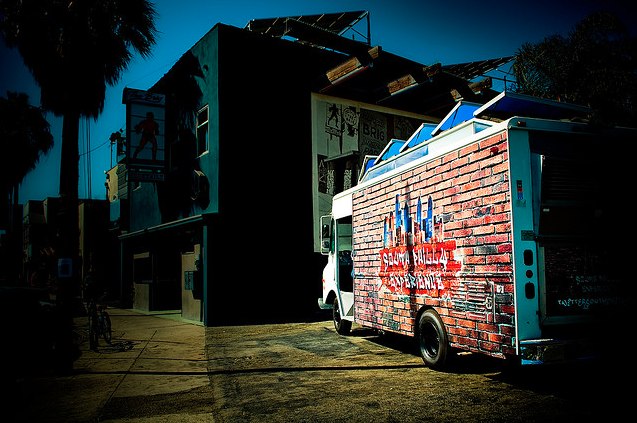 A food truck parked at The Brig in Venice in late 2009 (Photo by R.E.˜ via the LAist Featured Photos pool on Flickr)

When January 7th rolls around next week, food trucks will be rolling back into Venice to serve the First Fridays folk, thanks to a production company who are offering the ousted mobile eateries a spot to park, free from the merchants' and organizers' scrutiny.

Bigfoot Entertainment, a global production company with headquarters in Venice, has come up with a space for the food trucks, who were deemed unwelcome by local business owners and the organizers of the popular First Fridays community event on Abbot Kinney. For December's First Friday event, some trucks who typically pull into a spot there and patrons initiated a boycott because of the chilly reception and prohibitive measures implemented by the Abbot Kinney Merchants Association (AKMA) aimed at curbing food truck traffic.

By making their parking lot available to food trucks, Bigfoot is bridging the tense gap between the AKMA and the food trucks' organizing force, the SoCal Mobile Food Vendors' Association. The business is located off Electric Avenue, which "is bordered on one side by residences, but [SoCalMFVA's Matthew] Geller said that his group is working with Bigfoot to make sure the event is as unobtrusive as possible," reports Venice Patch.