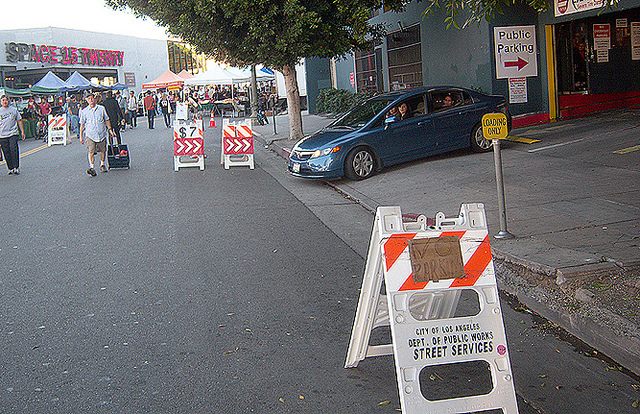 It seems the Los Angeles Film School and the Hollywood Farmers' Market have come to a peaceful and long-awaited temporary agreement to the parking access and street closure controversy that has rocked the community for the past few weeks. Last Thursday, a meeting held between the market and its operator, nonprofit Sustainable Economic Enterprises of Los Angeles (SEE-LA), the school and Councilman Eric Garcetti's office produced "an agreement that would keep the market open until April 12 while its organizers and the film school seek a permanent solution to the parking problem," according to an AP report published by the Huffington Post.

The Film School took some time to come around to the agreement, however, as over the weekend, word circulated among supporters of the Market that the Film School had once again balked at the agreement and would not sign on the statement.

"Up until almost midnight [Thursday] night, Councilman Garcetti and his staff tried to negotiate mutually-acceptable language which would reflect the basic interests of each side. In the end, we were not able to come up with language which would satisfy the Film School. That is the reason why the Film School is not officially signing-off on the joint statement," explained Chairman of the Board of Directors of SEE-LA Mike Woo in an email sent on December 18th.

The Film School, to some extent vilified by supporters of the Market, have struggled in the wake of the backlash against their wish to have full access to their parking garage, and have cited the negative depiction of their plight as reason for being less accommodating in the negotiations.

From the AP piece:

The Los Angeles Film School recently added computer animation and video game production to its curricula of film and recording arts, more than doubling the size of its student body from 750 to 1,700, spokesman Antoine Ibrahim said.

The growing population has increased demand for parking spots on Sundays, when throngs of students flood the school's labs and studios, Ibrahim said. The school also plans to begin holding classes on Sundays to relieve increasing weekday class sizes, he said.

Ibrahim insisted that the school never meant for the market to be shut down. It just wanted the vendors blocking the lot to be shifted to another part of the market.

"We've always worked with them to compromise and coexist," Ibrahim said. "We don't want them to move."

The Market's Assistant Manger, Alexandra Agajanian, told LAist on December 8th that their priority remained seeing to it that no vendors would be affected by any changes to the market's scope of operation, and emphasized that the HFM supports other markets and programs with their revenue. Following news that the talks had reached a stalemate, the grassroots campaign to "save" the HFM as we know it intensified, and many supporters put in calls and emails to Garcetti's office to stress the value of the Market.

The agreement reached on December 16th, and supported now by all involved, sets for the following terms, according to a press release issued by Garcetti's office on December 18th:

-During the 90-day period, the Hollywood Farmers’ Market has agreed to study potential adjustments to its current footprint to address the needs of both parties and, if an adjustment is to be made, to have prepared a time line to implement the adjustment.

-The L.A. Film School will review the feasibility of the market’s request to join the school’s two parking structures.

-The Board of Public Works will issue a 90-day extension to the Farmers’ Market’s current street closure permit, enabling it to operate and maintain the status quo through April 12, 2011.