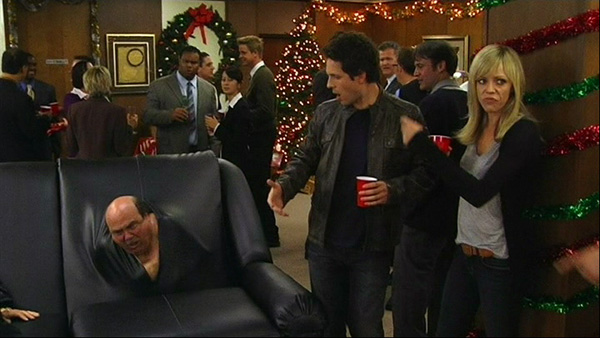 Last Christmas we saw a leather couch give birth to a greased-up Danny DeVito. Get ready to relive that moment tonight on "A Very Sunny Christmas" at 10pm on FX

The Paley Center for Media has announced some of the lineup for PaleyFest2011. Shows to be highlighted include "The Walking Dead," "True Blood," "Freaks and Geeks"/"Undeclared" Reunion, and "American Idol." More info about tickets is available here, the full lineup will be announced on January 19.
—-
BBC Worldwide has made a the Doctor Who: The Mazes of Time iPhone, iTouch, and iPad app is now available for download. This release coincides with the imminent broadcast of "Doctor Who: A Christmas Carol", airing on BBC America on December 25 at 9pm ET & PT which the extreme nerd in us can not wait for!
—-
You still have time to get some DVDs as Christmas gifts so we thought we'd highlight some of the more hilarious examples from Roger Corman's Cult Classics as released by Shout Factory this year:

Cannibal Girls (1973) - "These Girls Eat Men." Eugene Levy (with a hilarious 'stache and afro) and Andrea Martin from "SCTV" star in this unbelievably schlocky, to the point of outright hilariousness, movie about girls who lure guys to their cannibalized doom. The movie features a "warning bell" that goes off if a scene is about to get really gory.

Roger Corman created an incubator for emerging talent to work writing, directing, and acting, it also provided a place for people who were at a plateau in their careers to keep their skills in use with many returning to the mainstream after being in a couple Corman films. You won't believe the list of award-winning actors, writers, and directors who cut their teeth on these films that alternate from hilariously bad to inspiringly good. Check out the full list of movies at Shout Factory.

---
If you went to Greg Proops live podcast event, The Smartest Man In The World, at Bar Lubitsch last week that's awesome for you, but if you missed it, download the podcast today and listen to his take on current events. Proops was great on Craig Ferguson's show a couple nights ago but didn't have a chance to push the podcast.
---
Don't forget to check out today's Channel Zero podcast in which we discuss the Golden Globes and Screen Actors Guild awards nominations. Subscribe on iTunes or check listen via the player below.
---
Also, the Smart Car is launching an effort to reuse and recycle this holiday season - they've made a great video of the effort and it's posted below.
---
The TV Junkie Must-Watch Plan: "Brew Masters," "Burn Notice," "It's Always Sunny in Philadelphia," "Chelsea Lately" (Amy Adams), Letterman (Matt Damon), Fallon (Paul Rudd, Jon Lovitz, Aloe Blacc)

8:30pm $..! My Dad Says CBS - Bonnie attempts to start a tradition; Ed makes a new friend at the hospital.

The TV Junkie's Channel Zero Podcast in which we review the Golden Globes and Screen Actors Guild Awards nominations: