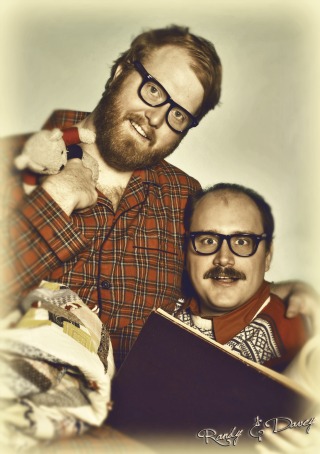 The pageant aspires to be a corny tribute to the TV Christmas special—a variety show in the style of Bob Hope or even Lawrence Welk. According to Liedtke, expect "comedy, magic, juggling, ballet, opera, cookies" as well as "The John 3 Reillys," which, as the name would suggest, are three musical John C. Reilly impersonators.

Johnson and Liedtke cut their chops as performers on the Tomorrow Show, a Saturday night tradition at the Steve Allen, where they would often interrupt sketches, earning them the title of Doorknockers.

Last year's inaugural pageant was such a success they have decided to reprise this year. And they have brought their friends along for the ride; these include comic Laura Kightlinger, singer Mela Lee, and Ron Lynch, co-host of the Tomorrow Show. While the season may be the reason, any excuse is a good one to throw a party for the Doorknockers; in the words of Johnson, "We're inspired by parties. Any excuse is the perfect excuse to have one."