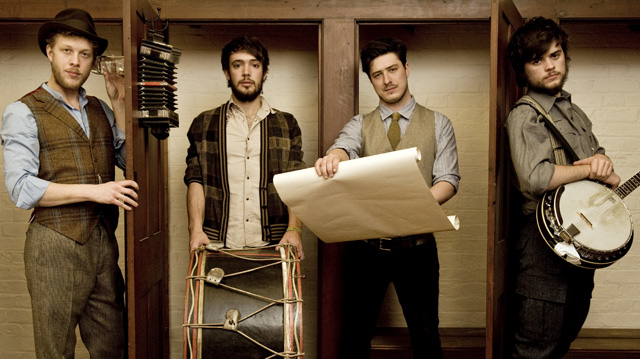 Last week, London-based band Mumford & Sons received "Best New Artist" and "Best Rock Song" Grammy nominations. If the Grammys had a category for "Best Live Show," they probably would've scored that as well—as anyone who attended their October show at the Hollywood Palladium would probably attest.

The band had such a command of the stage that they were able to perform a completely unplugged version of their song "Sister" as the 4,000 people in attendance strained to hear every note—moving as one organism as the crowd pressed closer to the stage.

All four band members (Marcus Mumford, "Country" Winston Marshall, Ben Lovett and Ted Dwane) are multi-instrumentalists, self-taught on instruments such as the dobro, banjo, string bass and mandolin. The band has been touring almost nonstop since forming in 2007, and with the release of their first full album, Sigh No More, they've been playing sold-out shows around the world.

LAist caught up with Dwane (vocals, string bass) and Marshall (vocals, banjo, dobro) prior to their Grammy nomination to get the scoop on the album, their favorite LA eatery, and their recent collaboration with Ray Davies.

LAist: Did you write "Sigh No More" to open your shows, or did it just evolve into the perfect opener?

Ted Dwane: We didn't write it with that in mind, but we found ourselves opening the shows with it because it worked so well. The a cappella aspect also makes it a perfect warm-up. It brings us together then it brings the audience in. It's a good place to start.

Everyone in the band seems to have their own special section on the Mumford & Sons website [Ted has his photography, Marcus has his book club and Ben has his cooking] except for you, Winston. Might you get your own blog soon?

Winston Marshall: Well observed. I did try a couple things. The original idea was to do banjo lessons, but unfortunately I'm really not good enough to do that. And then the next idea was to get out the video camera and talk about the cities we visited on tour—I did one Delhi and one in Los Angeles. I lost my flip cam, so that was the extent of it.

Ted: They were brilliant. I think you should put those up on the site.

Agreed. And I have a suggestion for something else you could try. As of late it seems like a lot of comedians are getting rave reviews for their banjo playing, so maybe you could try your hand at comedy.

Winston: (deadpan) Well, I very much consider myself to be a comedian because I'm bloody funny.

Actually, the first modern-day banjo-player-turned-comedian was Billy Connolly. He started in the Humblebums with Gerry Rafferty, who went on to write "Baker Street."

So Billy was in the band and they took so long tuning and stuff between songs that he started doing comedy. And that's how his comedy career began. Since then, the comedy's taken over. He's also hosted a travel program...

Ted: So you're basically likening yourself to Billy Connolly.

Winston: I'm very much the Billy Connolly of the now.

Winston: True. Maybe I could be his apprentice!

Ted, since your special section of the site focuses on your photography, do you think you'll ever release a photo book?

In creating this album, Sigh No More, you really harnessed your live sound. How did producer Markus Dravs help you capture that?

Ted: All our songs were written on the road and they were all developed in front of an audience, so we made an album because fans were asking for it and it felt like the next obvious move. We've always thought of ourselves as a live band, so we felt the album should represent that. We did our best and I'm glad to hear you think we pulled it off somehow.

Markus was amazing to work with—really imaginative. I think Markus' term for the album's sound was "relentless drive." For the most part, we don't have a drummer, so there was a lot of Marcus' kick drum and the banjo, which is very rhythmic.

Speaking of rhythm, have you ever had someone break out into a waltz in the middle of a song like "White Blank Page"?

Ted: I don't think so, but that would be awesome. Actually, I saw the very opposite during our set at Reading Festival.

What's the opposite of a waltz?

Ted: Unbelievable. I didn't see it coming. Moshing to Mumford. Who knew?

Winston: That was the best day of my life.

This album has been a big hit in England for a while now. Is it surreal re-living the album launch in the United States? Are you switching things up while you're playing?

Ted: We're introducing new songs all the time. About a year ago, we started making set lists, which is quite novel for us. But we rarely stick to them. And when it comes to the encore especially, if people want you to come back on, it's nice to gauge the vibe and do something you reckon they're in the mood for.

If it's a really rocking night, then we'll play a rock 'n' roll song, or if it's a really listening crowd, then maybe we'll do something acoustic or play a song they may not have heard. So yeah, we like to mix it up quite a lot.

It's remarkable too that one of your biggest hits [Grammy nominated] "Little Lion Man," nearly didn't make it on the album. Winston, weren't you the one who saved it?

Winston: Yeah, we were choosing the tracks for the album and it could have gone two ways—more song-based with songs standing alone, or a lot more album-y with fewer stand-alones and more of an overarching vibe.

But it ended up kind of in the middle and I think "Little Lion Man" does a great job of sonically tying together songs like "Thistle & Weeds" with tracks like "The Cave."

Ted: We spent a lot of time deliberating over the shape of the album. There were a bunch of songs we were playing—and that we embraced—that were left by the wayside and didn't make it on, which is a bit of a shame.

There seems to be this thread of hope throughout the album. Was that intentional or did it just happen that way?

Ted: There's not really intention behind anything we do. (laughs)

Winston: With the song choices, the word "hope" is used in quite a lot of the songs. We actually took some tracks off the album because we didn't want to repeat it too much—stuff like "Feel the Tide" and "Hold on to What You Believe." Come to think of it, I guess there's a theme of "holding on" too. The recurring themes bring everything together, but we also didn't want to overdo it.

People love it when you switch instruments at a show. How were those first few shows where you were playing less familiar instruments for a song or two?

Ted: The first few times I played drums on "Thistle & Weeds" I thought to myself, "There are loads of people here and they shouldn't be paying to watch this. It's just embarrassing!" But it got better. I think we all just enjoy music, so it's all about having fun and, above all, serving the songs.

It's interesting that you're multi-instrumentalists and yet you didn't come from musical families. Were dobro lessons easy to find in England?

Ted: I don't know that any of us have. Well, Ben had some keys (keyboard) lessons, but the rest of us are self-taught.

Wow! Was listening to music a key part of your education?

Ted: Yes. All of us were into different stuff. Winston was very much into country and bluegrass...

Winston: Among the four of us, American/English musical history of the 20th century is pretty well covered.

You recently collaborated with Ray Davies. What was that like? Did he offer you any advice?

Ted: He was so sweet and it was such a humbling experience. We found out about the whole collaboration through an interview he did in which he stated that he'd like to work with us. So we made sure it happened. We went to Konk Studios in North London for two days and worked with him.

Before meeting him, we figured that he's such a big name that maybe he wouldn't even be there. Maybe it'd just be an executive producer on the mic saying, "Do it better!" But sure enough, he was there and he is such a creative guy. It was an amazing two days, then as he was saying goodbye, he just told us to look after each other.

Winston: We try to. 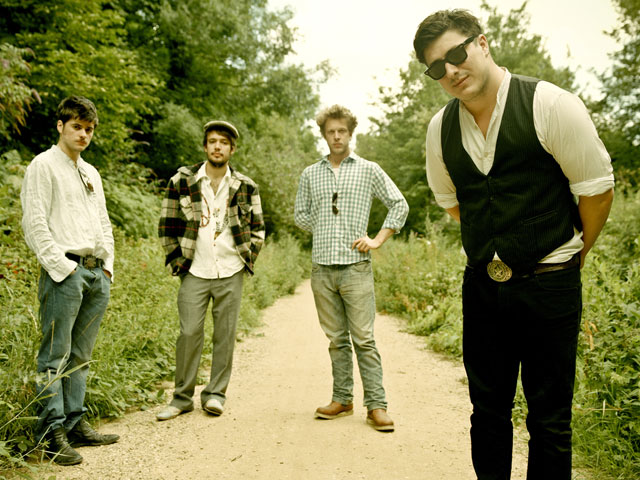 Have you already started to work on your next album?

Winston: We're going to take Christmas off then reconvene in 2011. We've already got a bunch of songs ready to go. We'll rehearse, arrange and all that, then probably start touring again at the end of February. We like to tour before we record. It helps quite a lot to listen to it through other people's ears.

Hopefully your tour will lead you back here sometime soon. What are some of your favorite places to hang out when you play a gig in LA?

Ted: We don't really know LA that well. We need some people to show us around. A few of the guys went to the Getty recently and said it was amazing, so I want to get up there.

But Barney's Beanery is pretty much where it's at as far as we know. Great burgers. Cheap beer as well—$14 pitchers. By English standards, that's pretty good!

Thanks for speaking with LAist, Ted and Winston!

Hear more of "Sigh No More" at www.mumfordandsons.com