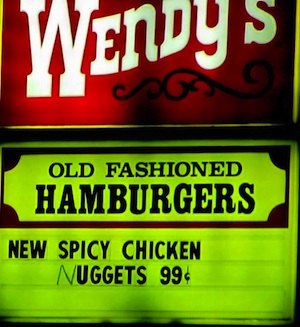 It'll be harder to find "n"uggets in South LA (Photo by Lucyrk in LA via the LAist Featured Photos pool on Flickr)
A Los Angeles City Council committee voted to approve a new ban yesterday on "stand-alone" fast food restaurants in South Los Angeles, according to the Daily Breeze. Under this new ban, which can be viewed as an extension of the previously instituted moratorium on new fast food establishments, fast food restaurants cannot open "within a half-mile of existing establishments."

Citing ongoing concerns about the health of area residents, including obesity and diabetes, local Councilman Bernard Parks endorses the ban, saying "these restrictions are fair, common-sense way of providing South L.A. residents additional food choices that exist in West L.A. and other parts of the city."

Councilwoman Jan Perry agrees, and points to nearby communities like Westwood, Venice, and West Los Angeles, where residents have more access to grocery stores so they can prepare their own meals, and where there are far fewer fast food restaurants for dining options. Two years ago, Perry spearheaded the now-expired two-year moratorium on new fast food restaurants in the area.

The proposed ban stipulates that "new stand-alone fast food establishments would no longer be able to obtain permits and other approvals by right, but must obtain approval by meeting several criteria," including being situated further than a half-mile from current fast-food restaurants.

Further, the proposal includes requirements for the new businesses to "comply with aesthetic requirements on landscaping, provide rear parking, and other requirements aimed at ensuring the compatibility of the project with the surrounding community." Mixed-use developments are exempt from the ban.

The proposal goes before the full council tomorrow.