Seasonal Eats: A Little Something About Sunchokes 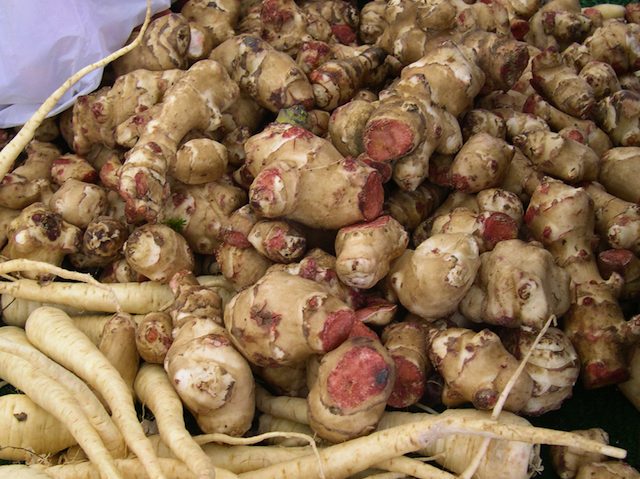 Jerusalem artichokes are neither from Jerusalem, nor are they artichokes: discuss! (Photo by Heather Parlato for LAist)

By Heather Parlato/Special to LAist

I'll admit, I don't have an extensive history with Jerusalem artichokes, so when I saw them at the farmer's market, I decided to make them the topic of the week. As the photo caption suggests, there is no easily-searchable information on how they got “Jerusalem” in their name. They're native to north America, though when cooked, they do have an artichoke-like taste.

Alternately called sunchokes because of their relationship to the sunflower, Jerusalem artichokes are tubers that resemble ginger root's tougher cousin on the outside, without any of the tough fiber on the inside. They're light and mildly sweet, giving a satisfying snappy crunch even when you slice them. For this reason, they may be eaten raw or cooked at any size, never offering too much resistance to the bite.

The flavor this October-to-April seasonal veggie offers can differ quite a bit from raw to cooked. When raw, they are less sweet than apple, like radishes without the spice, pleasantly juicy and crunchy with a bit of nuttiness. The artichoke-potato flavor comes out when they're cooked, which you can do almost any way you like.

Jerusalem artichokes are often paired with other root vegetables and tubers, but despite some of the similarities, they'll be cooked in less than half the time. They contain the carbohydrate inulin instead of starch, which gives them a glycemic load of 11 (less than a yam), and can make them hard to digest for some people. Finally, they're a good source of Thiamin, Phosphorus, Potassium, and a very good source of Iron.

In terms of preparing them, they'll go really well with many of your holiday side dishes. Use them to add texture of flavor to your mashed potatoes with potato, celery root and Jerusalem artichoke puree, or serve them on their own sautéed in garlic, roasted with oil and rosemary, fried up as chips, or pickled. You can pick any tubers or root vegetables to throw in a pan and roast up together, Jerusalem artichokes only enhance the mix.

Jerusalem artichokes can do more than side dishes, however. Let them bring that artichoke flavor where you normally can't get it and roast them with chicken. They're delicious in soups, and while you can find plenty of potato & cream-of soup recipes, these two caught my eye: sunchoke and sausage soup, and yes, together at last, cream of artichoke and Jerusalem artichoke soup.

If you're looking to use them raw, they go really well in salads and with fruit. This fall salad of chicories, citrus and sunchokes looks amazing! I also made one of my own to share. 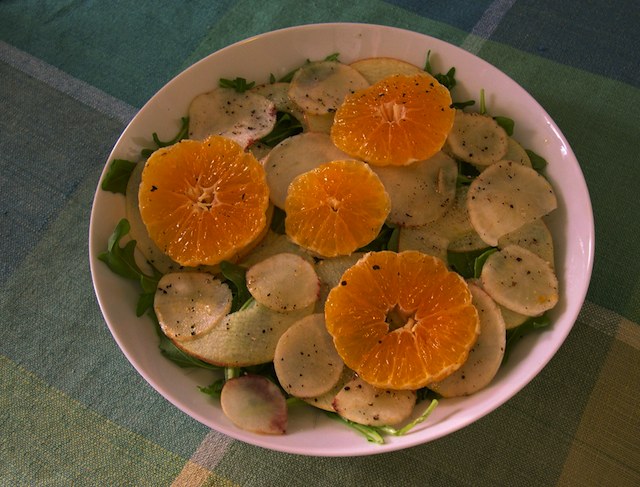 Photo by Hearther Parlato for LAist

Slice or chop the Jerusalem artichoke and apple to desired thickness & size and put them in a bowl [I used a mandoline for a nice photo, but you can also dice or chop if you prefer]. Juice one of the tangerines over ingredients in the bowl, and add 1 tb of vinegar. Toss to coat and set aside [20 min is fine].

When you're ready to serve, place one large handful of arugala in each bowl. Spoon the marinated Jerusalem artichoke and apple over the greens, and pour any remaining marinate liquid over the top. Peel and slice the remaining tangerines, and arrange over each salad. Drizzle a swirl of olive oil and splah of vinegar over each, and season with salt & pepper.

Optional: if you want to add cheese to this salad, shaved Parmesan or crumbled feta are great choices.