Can One Business Shut Down the Hollywood Farmers' Market? 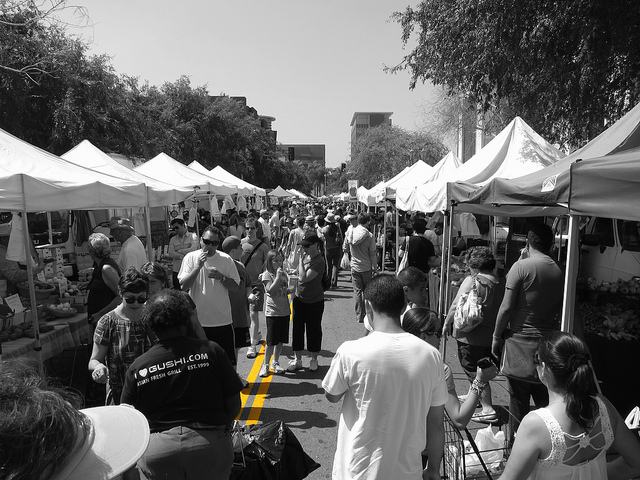 Photo by sfxeric via the LAist Featured Photos pool on Flickr

The Hollywood Farmers' Market takes over an imposing section of streets every Sunday with its stalls stocked with fresh produce and other wares, and its aisles packed with shoppers. However the future of the market is in jeopardy thanks to a sole business in the area, according to KTLA, and the issue is parking.

The L.A. Film School "wants to reclaim the use of their parking lot that is normally blocked once a week from 8:00 a.m to 1:00 p.m on Sunday," the market's Chief Executive Officer, Pompea Smith, told KTLA. The Film School is "asking that the market’s permit not be renewed for that location; if not renewed, the market volunteer was unsure where they would go and whether it would be large enough to accommodate all the current vendors," notes BloggingLA. "If all this seems like it’s coming out of no where, it sort of is: the volunteer also said that this all popped up within the last month, conveniently right as their permits are up for renewal."

As of next Sunday, vendors will no longer be permitted to use Ivar Avenue, which is severing one of the market's major arteries. "That means approximately 150 vendors who sell their own products every Sunday will be displaced. Smith says vendors will lose the more than $130,000 in income that is generated every Sunday."

A movement began immediately online yesterday to mobilize supporters of the market, which includes the creating of the Protect the Hollywood Farmers Market Facebook page.

Twitter was abuzz with the topic, including comments from many LAist readers, who directed commentary to City Council President Eric Garcetti, whose council district includes the market area. Said Garcetti on Twitter: "I agree 100% [that the market must continue]--am proud to have raised pvt & public funds to expand & support it. My office wrkng to help resolve." Garcetti did not respond to a request to further discuss the issue, however Market organizers are expected to meet with city officials today at 2PM at the Farmer's Kitchen.