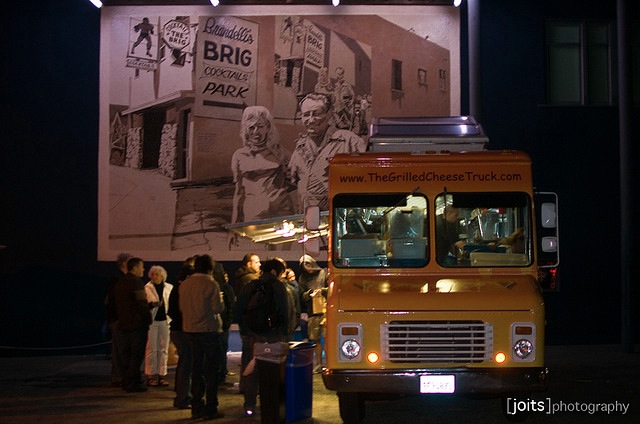 The Grilled Cheese Truck parked at The Brig, October 2009 (Photo by Joits via the LAist Featured Photos pool on Flickr)

It's the first Friday of the month, which means along Abbot Kinney in Venice it's the monthly First Friday event. Folks hungering for a face-full of food truck fare with their Holiday Art Walk will be sorely disappointed, though, because First Fridays is kicking the "nouveau" meals-on-wheels-mobiles to the curb, according to Yo! Venice!

Last week the Abbot Kinney Merchant’s Association (AKMA), with the grant from the City of Los Angeles, decided to institute a parking ban during First Fridays, according to a release sent on behalf of the the SoCal Mobile Food Vendors Association (SoCal MFVA). In the past, SoCal MFVA says they were trying to work with AKMA to ensure the food trucks would take part in the popular event in a clean and safe manner, and SoCal MFVA funded the trash removal for every First Friday in which their trucks participated.

Though there won't be food trucks there tonight, plans are already in motion to tackle the January event, according to Yo! Venice! who break down the situation with the following points:

1. Food trucks are going to try and get the same permits for the January First Fridays and bring their own porta-potties.
2. “The Brig” and one other local business will likely fill their parking lot with food trucks this week. If that happens, they may be looking at some angry merchants turning them in for violating their conditional use permit, as they are supposed to provide parking for customers.
3. Food trucks that show up and try and use residential streets nearby will be met by the health department, who will be looking out for any and all violations including “bathroom letters”.

In response, some trucks, and some patrons, are calling for a boycott of tonight's event. For his part, Matthew Geller, CEO of SoCal MFVA, says the AKMA's decision to deny parking "affects the ability of our members to operate, limits consumer choice, and detracts from the overall experience of the event."

Venice merchants, particularly those on Abbot Kinney, have had a contentious relationship with the food trucks, primarily because of the limited parking options on the boutique-laden street, and have raised objections to the crowds and trash. Tonight could prove one way or another how integral the food trucks are to the event.