The Desert of Forbidden Art marked its Los Angeles premiere on Thursday night at the Aero Theatre in Santa Monica. The doc tells the story of Igor Savitsky's quest to save avant-garde Russian art from Soviet censors and build a now legendary museum to house it in backwater Nukus, Uzbekistan. Celebrity narrators include Sally Field, Ben Kingsely, and Ed Asner, who ably portray the story's principals. 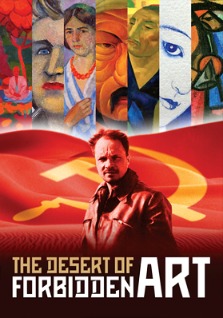 The movie's poster depicts Igor Savitsky as well as some of the artworks he saved.
Savitsky, an artist himself, moved to the autonomous republic of Karakalpakstan in Uzbekistan to take part in an archaeological dig. While Savitsky turned away from his own work, he found inspiration in local folk art, which he began to purchase. Soon he found a colony of Uzbek artists, many dismissed by the Soviet mainstream and living in poverty, and quietly collected their art. Only after convincing local communist leaders of the value of their folk art was he able to fund a museum. At a time when controversial artists were shunted away to gulags and their work hidden or destroyed, Savitsky made clandestine trips to Moscow to persuade unsuspecting widows and children to sell him their oeuvre. In all, he preserved over 44,000 works of art by his death in 1984.

The documentary benefits from a trove of source material meticulously tracked down by directors Amanda Pope and Tchavdar Georgiev. These include beautiful artworks, photos of Uzbekistan under Stalin, and even a training video designed for Uzbeks acclimating to Soviet society. Not only a story about art, the filmmakers also tell the equally unhappy tale of how Uzbekistan buckled under communist control during the twentieth century. This film is perfect for the serious Soviet-phile and neophyte alike, as well as anyone who believes that art only exists in big cities and not desert oases like Nukus.