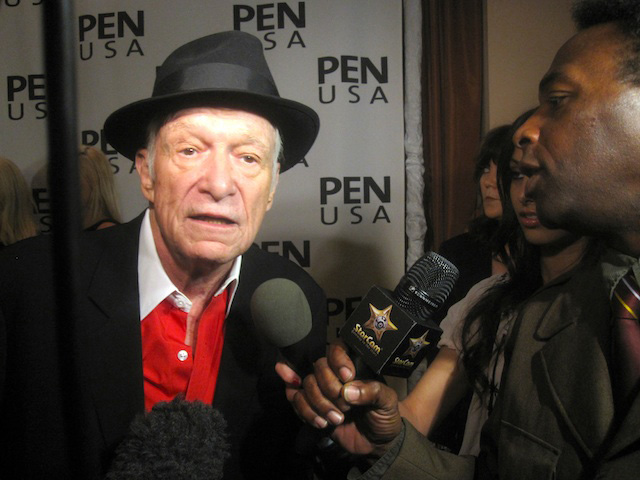 PEN Center USA's annual awards were held at The Beverly Hills Hotel on Wednesday night and many luminaries were honored for their work, including Hugh Hefner who received an Award of Honor for his editorial prowess and the First Amendment Award for his ongoing efforts to fight censorship.

It was an odd evening of Hollywood star power and literary minds mingling together. Entertainment reporters and many event-goers were laser-focused on Hugh and his bunnies while lovers of the written word were far more interested in getting a few moments to talk with Walter Kirn, Mary Melton and James Salter, recipient of PEN USA's Lifetime Achievement Award.

Though the red carpet was awkward as incredible literary minds were ignored once "famous" non-writers entered the fray (Hugh basked in the limelight while Salter deemed the flashbulb frenzy "ridiculous") and many took bets on how long Hugh's bunnies would stick around after his awards were handed out, PEN USA's mission to support emerging writers and protect their First Amendment rights was the true star of the evening.

In Cecilia Hae-Jin Lee's acceptance of the Research Nonfiction award on behalf of Minal Hajratwala, she reminded the audience that as we enjoyed our delectable cinnamon ice-cream, Arundhati Roy had received more threats for her work. Hugh Hefner echoed these sentiments in his very brief acceptance speech when he dedicated his award to Erwin Arnada, the former editor of the Indonesian version of Playboy who remains behind bars for publication of a non-nude Playboy issue.

By the time Matthew Weiner, celebrated producer of The Sopranos and Mad Men, introduced James Salter, the audience was restless. Few writers could have shaken them awake like James Salter, who was quick to joke that though he was receiving an award often given out at the very end of a writer's life, we were not to count him out. "I'm working on a new novel. And I think it's pretty good."

Salter went on to say that though "sometimes books by novelists in their later years are thin and unsurprising" he was taking inspiration from a photo of the race horse Red Rum that he placed near his writing desk. "He was old when he won," Salter pointed out with a stern smirk. Whether he realized it or not, Salter's determination to deliver work of depth and quality when many well-known writers peter out was a perfect way to end an evening that centered around writers pushing through many obstacles to tell their stories.

And wouldn't you know it, Hugh Hefner and his bunnies stayed for the entire show, tweeting and "TwitPict"ing their way through it all.