Interview: Joshua Radin Switches Up His Sound on 'The Rock and the Tide' 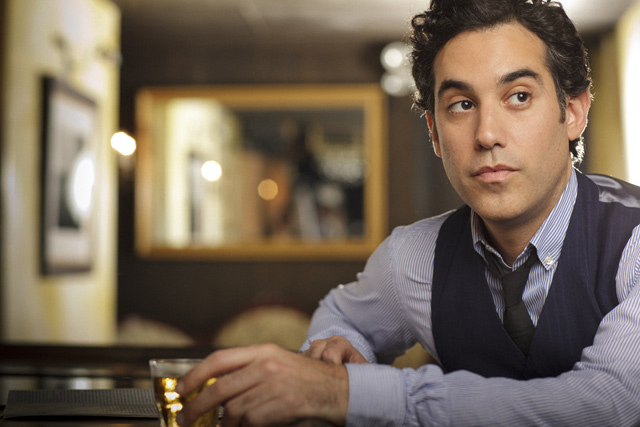 Joshua Radin's music has a way of arresting one's attention, which is probably why his songs have been used in more than 75 television programs and films over the last six years. But it's his full albums that offer the biggest payoff—they definitely live up to the promise of an initial taste.

Radin's third full-length album, The Rock and the Tide, showcases him at his most ambitious and playful, and proves he's just as adept at straight-up rock as he is at "whisper rock." Radin will perform at the Music Box Thursday night, and LAist spoke with him last weekend to get the scoop on the new tunes, his thoughts on writer's block and his favorite eateries in LA.

LAist: How did the recording process for this album differ from your previous experiences?

Joshua Radin: Most of it was recorded live, which I'd never done before. I'd teach the band a song, they'd make a couple notes, then our producer Martin Terefe would say, "Go!" We were all in the same room, and it was much more fun that way. Nearly every song on the record is the first or second take.

Did you have any happy accidents that occurred because of the fact that you were playing live?

Yeah, that’s the beauty of it. I was watching this documentary—I think it was the Scorcese one about Dylan, No Direction Home—and was intrigued by a story from the recording of "Like a Rolling Stone." The producer said they needed keys or organ on a song, and this guy who was an intern or something said, "Yeah, I'll do it."

As they were recording it, he kept coming in a half-beat behind because he was learning the song as he went. But they kept it in the song because it sounded so cool. I thought, "I want to try that." To have the band learn the songs during the recording sessions brought out their raw, natural instincts as musicians.

Which songs off the new album are the most fun to play live?

"Nowhere to Go," "The Ones With the Light," "You're Not as Young" and "We Are Only Getting Better" are all up there. All the rock stuff is really fun to play. That's why I wrote those songs, because I was getting tired of having a 90-minute concert every night with really mellow, low-tempo stuff. I wanted to take the audience on a little journey so it'd be more of a roller coaster. 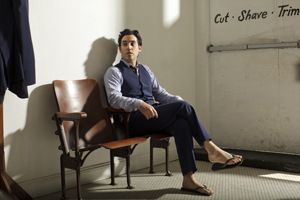 Joshua Radin (Photo by Alan Gastelum)
I enjoyed how you incorporated a "Brand New Day" reprise at the end of the record. What led you to decide to hearken back to your second album, Simple Times?

We did a different version of it for the UK release of Simple Times. People really liked it over there, so we figured we'd throw it on the record. That way people can pick their favorite version.

The title song, "The Rock and the Tide" features some great lyrics. Would you tell me a little bit more about the theme of patience within that track?

It's very much about patience and I think that's my favorite song on the record. It's about this girl I met, and I was pretty smitten right away. I was on tour for a very long time, so we were writing each other these long e-mails, never really getting to see each other.

I felt like it was the first real thing I'd found since my ex-girlfriend, and it was great because we were taking our time and building something real. So the whole song is about waiting and waiting and waiting, but then in the chorus I get a little impatient and it's this idea of, "I'm through waiting; I need you now!"

Speaking of waiting, what was it about this album that prompted you to release your first vinyl LP with this record?

I wanted to release the others on vinyl too, but at the time we just didn't have the money to do it. I love this record and the timing was right.

Your songs have been featured in more than 75 shows and films. What's one TV show you'd love to have your music featured in?

I would love for one of my songs to be in Eastbound & Down. That's my favorite show on TV right now. I'm bummed that the latest season just ended.

In your early career, you worked as an artist and screenwriter. Do you ever return to any of those art forms when you're dealing with writer's block in your songwriting?

To be honest, I never really have writer's block, or at least I don't see it that way. There are certain times when I sit down and think, "It'd be cool to write a song right now," but nothing comes. But I don't really consider that writer's block.

During those moments, I'm just lacking inspiration and need to meet a muse. And a muse doesn't necessarily have to be a girl I like. It could also be having a great conversation with someone in my band, or hanging out with my family, or something related to politics...whatever. You have to be inspired to write, and sometimes you're just not.

I can't imagine what it would be like to be inspired all the time, like when Dylan was young and constantly writing. I don't really get that at all. I guess that's why he's a genius. 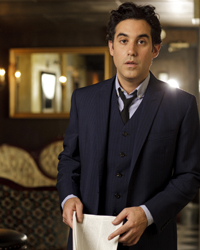 Joshua Radin (Photo by Alan Gastelum)
I love the line in "Wanted" about the woman sleeping near the books she's read. What are you reading now?

I just started that new Jonathan Franzen book, Freedom. A friend recommended the novel and it's pretty good. I usually don't read a lot of new stuff; I'm not familiar with most of what's on the bestseller list. I usually read much older stuff that has really stood the test of time. If I'm going to sink my teeth into it, it's gotta be really good.

Given that you write, might you ever go the Josh Ritter route and write a novel?

I would love to write a novel before I die. What writer doesn't want to write the great American novel? It's very daunting, though, so I don't know if I could do it. I'd probably have to live a lot longer and have a lot more experiences to feel like I have enough to fill an entire novel. It's much easier to write a three-and-a-half-minute pop song.

When I used to write screenplays, people would ask me how it compares with writing records and I'd say, "Writing a film scene you really love is a lot like writing a song you love. Ultimately you have to put all these scenes together to make a movie, just as you'd put songs together to make a record."

What would the film be about?

It would probably be loosely based on my life, but I'm sure I'd embellish it a little bit. I'm a little boring so I'd want to make it more interesting. (laughs)

Now that you're living in New York, which places in LA do you absolutely have to visit each time you return?

I would say that taco stand on Hollywood and Vine. I can't remember the name at the moment. I always get a burrito there. And I love Irv's Burgers in West Hollywood. That's my favorite burger. I also really love the chopped chicken salad at Joan's on Third. I always swing by there for a salad when I've had too many burritos and burgers!

As for venues, I always stop into the Piano Bar and the Hotel Cafe to see some friends and have some drinks.

Over the years, what have been one or two of your favorite memories or lineups from shows at the Hotel Cafe?

One night it was Priscilla Ahn, Amos Lee and me. That was a nice little night of music. Another night Ben Harper came in and played a little with my friend Tom Freund. And one time Brett Dennen and I did a Simon & Garfunkel cover night where we called each other "Stimon & Garfinkel." We didn't advertise it under our real names, so none of our regular fans were in the crowd. It was a bunch of random people who were probably perplexed by our barrage of Simon & Garfunkel covers. We had a blast.

You and a number of your Hotel Cafe friends wear some pretty dapper hats—bowlers, fedoras, and so forth. Between you and Cary Brothers, who first started the trend?

I was wearing them before Cary. Cary always used to wear trucker hats! (laughs)

I'm curious about one of your older LA-inspired songs, "Vegetable Car." Did the eco-friendly girl with the Lisa Loeb glasses ever learn that the song was written about her?

Who knows! I've never met her so it's hard to say. It's been a few years, so I don't know if I'd recognize her—unless she still has those glasses and is still driving around in the same car.

Thanks for speaking with LAist, Joshua!