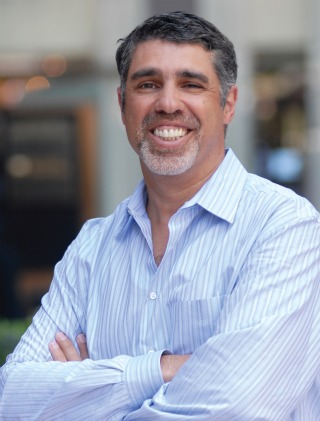 Photo by David S. Rubin
On June 17, 1994 the nation's eyes were focused solely on events taking place in Los Angeles, as the LAPD pursued O.J. Simpson and A.C. Cowlings driving down the 405 in a white Ford Bronco. While an estimated 95 million viewers tuned in to watch this event unfold, ironically, one person who didn't see any of the chase gained a great deal of notoriety from that night. In his new book, executive producer of "The Howard Stern Show," Gary Dell'Abate explains what he was doing instead of watching someone deliver an unforgettable crank call taken on the air by ABC News' Peter Jennings that ended with "and Baba Booey to y'all."

Surprisingly, stories like that one are just a very small part of what makes Dell'Abate's book They Call Me Baba Booey difficult to put down. Rather than go from cover to cover with anecdotes from behind the scenes of the most popular radio show in the world, Dell'Abate's memoir is more of an intimate look inside the life of a young man growing up with a clinically depressed mother. The hard hitting and humorous book will give you a Gary that you've never seen or heard before.

Don't worry, Stern Show fans there is still plenty of stories about his time working with the "King of All Media," including entire chapters dedicated to his forgettable first pitch at a New York Mets game, his infamous "Hello, hello" video and, of course, the birth of the "Baba Booey" moniker.

Tonight at 7 p.m., Gary will be signing copies of They Call Me Baba Booey, which is currently number six on the New York Times Best Sellers list, at Book Soup. In addition to the signing, Jillian Barberie (LAist Interview) will be interviewing him along with an audience Q&A session.

We were fortunate enough to have our own Q&A session with the man they call "Baba Booey," who will also be signing books on Saturday at Borders in Torrance. We spoke on the phone with Gary about the book, the success of the show, the future, the progress he sees in fellow Stern Show cast member — Artie Lange and much more.

What has been the most rewarding aspect of writing the book?
The fact that people are interested in it and interested in more than just the fact that I’m the guy from "The Howard Stern Show." The response has mostly been 'Wow this isn’t the book I was expecting' and 'There’s a lot stuff I didn’t know about you.' So I think it’s really cool. That’s what I’m hoping to achieve and that’s what I’m hearing so far.

While you’re telling many of these stories of your childhood and growing up you mention how these experiences prepared you for your job on the show. Was that something that you discovered as you went along with writing the book or something that you’ve realized over your time on the show?
Unfortunately, the answer is neither. My shrink helped me figure it out about six years ago or maybe more, maybe seven or eight years ago. I started seeing a shrink for a variety of reasons. Within that we started talking about my childhood. One day my shrink made this revelation. He said to me, "So what you’re saying is everyday when you went to turn the doorknob of your house you didn’t know if you were going to get kicked in the face emotionally or hugged?" And I said, "Yes." And he said, "Doesn’t that sound familiar to you?" And I said "What do you mean?" He said, "Well it’s sort of like when you walk into the studio everyday." The little light bulb went on over my head and I said, "He’s right."

You devote an entire chapter to the story behind the name “Baba Booey.” You said you were expecting it to be something that would just go away by the next commercial break. Obviously it didn’t. Wouldn’t you say that’s how a lot of the recurring, ongoing jokes on the show are?
There’s a word I use for the show. I say our show is very organic. Another show can try to plan that -- You could spend 20 years trying to recreate that and it would never happen. The reason why things on our show are funny is because they happen organically. It was real. It happened. We didn’t create it. It just sort of was. And that’s what I think is the beauty of our show. That’s how things develop.

You said that “Baba Booey” is less about you and more of a way for people to recognize other fans of the show. It served as a rally cry to bring fans of the show together. In Adam Carolla’s new book, he mentions that when he first met Jimmy Kimmel they spent a lot of time talking about Howard. Do you have a favorite story of people who were brought together by their love of the show?
We do a thing called "Celebrity Superfan Roundtable" and it’s hosted by Jeff Probst, the host of Survivor, and Natalie Maines from the Dixie Chicks. They met at a party and realized that they were Howard Stern Superfans and called me and said that they wanted to do this show. Now, I would never expect those two to be friends with each other or not to be friends with each other.

Through that, they developed this network of other superfans. Jeff takes it very seriously. I love that guy. Jeff goes to parties and is constantly trying to recruit other people.

I think the show that we do, just regular "Superfan Roundtable" brings people together. It’s like saying "I’m in a club and this is a place I can go to talk about it." Maybe at work, you’re the only Howard Stern fan at your job but if you turn on "Superfan Roundtable" then you’re in your element.

Early on in the book you talk about putting gel in your hair and Howard was making fun of you for it. You said you were wondering if he was just doing that for radio or if he was telling the truth to do you a favor. How often in a day do you find yourself wondering what’s real and what’s just for the radio?
A lot. About a year ago I lost a lot of weight so I came into work a couple weeks ago I came into work wearing a white button up shirt. Generally, I don’t wear a white button up shirt because I was fat. So I wear the shirt because I had lost the weight. They spent the entire morning telling me that I look like a Colombian waiter. I didn’t go into work thinking I’m going to wear this shirt and they’re going to make fun of me.

Do you think that that blurring of what’s real and what’s radio is a reason for the show’s success?
Absolutely. If I thought a chick needed to lose a couple pounds and I told her that at a party, they’d ask me to leave. She comes on the show I can say, “Hey, you’re pretty cute but you could probably drop a couple pounds.” It’s what’s in my head. It’s not allowed to come out in real life but it’s perfectly acceptable to say it on the radio.

What’s one skill that Howard has that people outside the show may not be aware of?
There’s times when there’ll be like 20 people talking to him all at once and you’re not even positive if he’s listening and he’ll be able to take everybody’s comments and edit them immediately. He can instantly pick what’s good and what’s not. He has the ability to listen to everyone all at once and absorb all of the information around him and take in all of the parts that he thinks works for him. And not only is he taking it all in but he’s also figuring out a way to make it what he wants it to be. That’s a skill.

Howard has a lot of his own ideas and he’s willing to listen to other people’s ideas. The ability to take what’s his, take a little bit of this and a little bit of that and make the perfect cake is what I think his great ability is.

You’ve said that you noticed in your private phone conversations with Artie that you’ve noticed he’s making progress. What would you say is the biggest difference you’ve noticed?
Every time I talk to him he sounds different. I feel like from what he tells me that there’s progress being made. Sometimes it’s not always what he wants to hear. He’ll say things like "I feel bad about this" or "I feel bad about that" and I just tell him that that’s progress. Recognizing mistakes means you have the ability to move forward. Some people never get there.

How have you been able to deal with the uncertainty of your future?
You just got to forge ahead. If I wasn’t working on this book, I’d spend a lot more time dwelling on it and making myself crazy. I said this on the air, I’ve been with Howard a long time and I have great trust in him. I’m putting my faith and loyalty in the fact that he understands that there’s a big group of us and he wouldn’t leave us out to dry until the last second. He’s working out what he needs to get done for himself.

In the book you talk a little bit about that short period of time when you were left working at NBC while Howard had moved over to K-Rock. How much of that experience plays into how you are dealing with this current situation?
I think I’m a much different person now. Back then, I was a kid and Howard was everything to me. It wasn’t so much about money or a career at that point, it was just sort of like, "Man, the fun just left." I was having fun and now it’s gone. Now it’s more about career and family and making sure everyone is taking care of. You know what, if Howard left, the fun would be gone. I don’t doubt that I could get a job and make a living but I do doubt that it will be as much as I’m having now.

Gary Dell'Abate is signing copies of his memoir They Call Me Baba Booey tonight at Book Soup and Saturday at Borders in Torrance. For more info on the book, check out bababooey.com and follow him on Twitter @robertabooey.