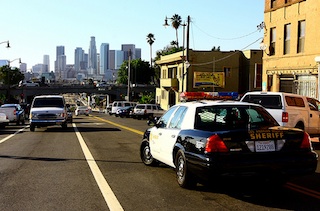 Photo by KingoftheHill via the LAist Featured Photos pool on Flickr
The Los Angeles County Sheriff’s Department (LASD) has been awarded a $1.1 million traffic safety grant from the California Office of Traffic Safety to fund their work in combating DUI deaths and injuries.

Motorists can expect additional enforcement measures to be put in place, particularly those aimed at educating the public and taking impaired drivers off the street during encounters such as those drivers experience at DUI checkpoints.

Other methods the LASD employ in their ongoing work to increase public safety on the streets is to conduct "warrant searches and stakeouts for repeat DUI offenders, saturation patrols, and court stings where DUI offenders with suspended or revoked driver licenses get behind the wheel after leaving court," notes the LASD in an emailed release.