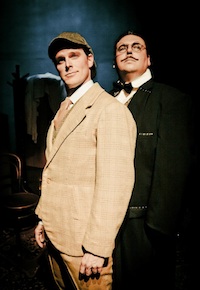 Joe Fria and Scott Leggett in "Watson." (Photo by Brian Taylor)
There has been no lack of adaptations of Arthur Conan Doyle's most famous creation, Sherlock Holmes. He's infiltrated every form of media for the last hundred years, and as I write this, he's the lead in a big Hollywood franchise and the subject of a modernization via a BBC TV series. This begs the question: can anything new and significantly fresh be done with the character? Not really. That being said, Jaime Robledo's comedy, Watson, successfully tweaks the formula with R-rated humor and constantly inventive direction, and its current production at Sacred Fools is hilarious and very entertaining.

The eponymous Dr. Watson (Scott Leggett) is recounting his last adventure with Holmes (Joe Fria): a trip across Europe to transport a mysterious box to an important government conference. Holmes is in terrible shape, his drug addiction getting the better of him, causing him to frequently rave about shadowy Turks and a criminal mastermind named Moriarty (Henry Dittman). Watson thinks both of these obsessions are fictional, and to help his rapidly deteriorating friend he engages the help of Sigmund Freud (French Stewart). Regardless of whether Holmes is hallucinating or not, Watson realizes that the outcome of this case depends on himself, and the sidekick must somehow become the hero.

Leggett is likeable and professional as Watson, but as the lead in a show filled with terrific actors, his portrayal is perhaps more muted than it could be. Fria, one of L.A.'s most gifted physical comedians, is a marvel as Holmes, shifting from sullen to loony to twitchily paranoid in a moment, staggering about with slippery grace, his face as protean and expressive as a silent film comedian’s. Dittman is a reservoir of arch wit as Moriarty, more teasing than threatening. He's amazing in a scene where he plays multiple characters--from a train conductor to a begging street urchin, from a cop to a pair of fops--switching roles as quickly as he switches hats. Stewart is bluntly amusing as a thuggish Queen Victoria, but he absolutely kills as a hipster Freud--a bullying horndog doc with the therapeutic instincts of Tony Montana--in one of the funniest and most skillful comedic performances to be seen onstage this year. The rest of the ensemble is consistently impressive.

Robledo's direction is unflaggingly creative, from using chairs bouncing up and down as horses or having two characters lie flat on the stage to simulate a fight on a minaret wall. A scene where he brings the mobile set ever inward to display Holmes' growing anxiety is expertly wrought, and a sequence where mime, lighting, sound effects and a lowering chandelier represent a balloon in flight is astonishing in its simplicity and effectiveness. Ryan Johnson’s original score for string instruments heightens the show’s emotions and its sense of dramatic adventure. Matt Richter’s lighting design adds measurably to the production through numerous small touches, particularly in an early scene where he flickers the light to re-create the unsteady illumination of London gaslight lamps.

Robledo's writing is often clever ("He was shivering like a naked Bedouin covered in sherbet."), but the plot is merely adequate and unfortunately the title character is the least interesting or realized in the piece. Overall, however, Robledo is clearly very talented, and this play is an auspicious showcase.