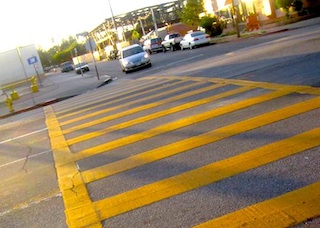 The crosswalk on Laurel Canyon at Archwood (Lindsay William-Ross/LAist)
Yesterday the Los Angeles City Council was presented with a motion by Councilmember Paul Krekorian to expedite the installation of a traffic light at a North Hollywood intersection that has been the site of multiple fatal accidents in recent years.

The crosswalk at Laurel Canyon Boulevard and Archwood Street was the scene of an accident last week that took the life of 12-year-old Emely Aleman, and injured her 10-yaer-old sister, Angela Rodriguez. Krekorian was joined by Los Angeles Unified School District Board Member Tamar Galatzan in demanding that the city install a light right away—a demand echoed by area residents who circulated a petition.

"The tragic accident involving Emely and Angela demonstrates the need to complete this improvement as quickly as possible," wrote Krekorian in his motion. The intersection is down the street from Roy Romer Middle School, where Emely was a student, and a block from the future site of the Bellingham Primary Center; the motion calls for the City to work with the LAUSD to ensure the light is installed without delay.

*Note: An earlier version of this article incorrectly stated the motion was approved. Councilman Krekorian's office has corrected their earlier release, and explains: "It was introduced yesterday, Nov. 10, and will next be heard in the city's Transportation Committee before it heads back to the City Council for a final vote."