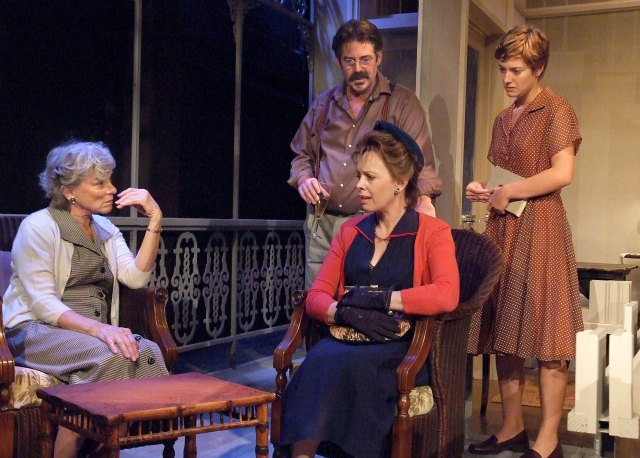 Lillian Hellman chose the title of her play The Autumn Garden well. Its inhabitants are generally of an age where they have begun to grade their lives as to success and happiness to see if their story has been a comedy or a tragedy. They haven't settled into winter yet, where thoughts of mortality begin to fill the oncoming horizon, but are still dealing with the messy, impossible concerns of life. The Antaeus Company's excellent production of Garden (the show is double cast—this is a review of the “Idealists” ensemble) captures all of the work's subtlety and complex characterization, along with its constant prickly wit, but most of all it displays a wry affection and empathy for Hellman's characters, who are striving to fix their lives before they feel the chill intimations of the final season's approach.

In 1949 on the Gulf Coast, Constance (Lily Knight) runs her old family home as a summer resort to make ends meet. Her niece Sophie (Zoe Perry), a French refugee from WWII, helps out as a maidservant and is engaged to Frederick (Joe Delafield), the son of one of the frequent boarders. His mother, Carrie (Jeanie Hackett), disapproves yet is unsure how to stop the match, but his grandmother Mary (Anne Gee Byrd) sees the truth of the relationship. Ex-general Ben (James Sutorius) wants a divorce from his manipulative Southern belle wife Rose (Faye Grant), and Edward (Stoney Westmoreland) has been holding a sputtering torch for Constance for decades. Constance, however, is thrilled that her old artist boyfriend Nick (Stephen Caffrey), along with his wife Nina (Jane Kaczmarek), is coming for a visit, but the results will unfortunately not resemble her cherished dreams of a romantic reunion.

Knight is superb as Constance, a woman who has been treated unkindly by life but hasn't given up. The way Knight plays Constance’s frequent disappointment--surprised at the pain, taking it in, and quickly adjusting and moving on--is unadorned and very moving. Sophie is a young European stuck in a provincial Southern town while the war has devastated her old life, and Perry is terrific at showing her forbearance and quiet intelligence, revealing her stress in a late night conversation with Edward and her determination in a chilly chat with Nora. Hackett brings hidden reserves of emotion to the loving but ineffectual Carrie, a character who doesn't get a great deal of stage time in Gardens but could easily be the protagonist of another play.

Mary has the sangfroid of a veteran viper, and Byrd takes relish in delivering each acid bon mot, but she also displays Mary's wisdom and compassion, particularly in her final scene with Sophie. Sutorius effectively conveys Ben's desperation to try and grab the reins of his life before it's too late, and Grant is simultaneously crafty and sympathetic as the rejected Rose. Westmoreland is outstanding as the even-tempered Edward, someone who has given up on his dreams but hasn't given up on being decent, and Delafield is successful at showing Frederick's young optimism as the good intentions of a person who doesn't fully know himself yet. Kaczmarek plays Nina with a coolly detached affect, as though Nick's follies only amuse her, but she also reveals the hurt beneath in a smart piece of acting. Finally, Caffrey is brilliant as the ego-tastic Nick, a self-amused monster who is just beginning to recognize the impending steepness of his decline. Caffrey demonstrates his extraordinary range and depth as an actor here, funny and cruel and light and pathetic, in a performance that feels utterly real and blazes with life.

Director Larry Biederman stages the action dexterously and benefits from the undeniably strong ensemble. If Hellman’s play has a flaw, it’s that it seems to have multiple endings, one after another, and thus the show’s conclusion lingers on a bit more than is necessary. Tom Buderwitz’s set is a sight to behold, an expertly detailed living room filled with ornate period lamps and settees, with scrim walls revealing a hallway and a staircase leading to a second level, and ornamental wrought iron as a finishing touch. Tina Haatainen-Jones’s costume designs are nicely varied and create a feeling of period authenticity.