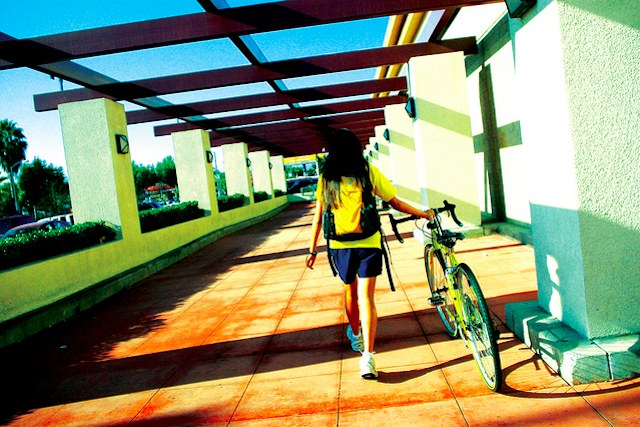 Photo by rchiba via LAist Featured Photos on Flickr

It isn't often you have most all facets of L.A.'s cycling community in agreement, but today they are coming together to protest the City of Los Angeles' bike plan, which goes up for a vote at Thursday's Planning Commission meeting.

Much of the disagreement with the plan comes down to three points: a commitment to bike lanes, defining bicycle friendly streets, and updating the Technical Design Manual.

"The draft [bike plan] is like glass ornament - shiny, beautiful and utterly fragile. The Mayor and City Planning have touted it as including 1600 miles of bikeways, but you would have to walk between the raindrops to make that a reality," said Alex Thompson at BikesideLA. " Sure, the draft has hundreds of miles of bike lanes 'designated.' But when you get down in the details you find out 511 of those miles fall in the 'further study' category - a category that has previously gone by the name 'potential' and 'infeasible.' Only 56 miles of bike lane are left."

The Los Angeles County Bicycle Coalition agrees, adding that planning staff believe an Environmental Review (EIR) will have to be conducted for many of the projects. But not so, they said, citing bicycle lanes that appeared without much notice, such as the project on Wilbur Avenue in Northridge.

"Calling out almost all bike lanes projects in the plan as potential and stipulating that many will need an EIR can delay implementation and greatly inflates the costs of the projects," the group said."It also shows a lack of commitment from the city to the vision of a more bike-able Los Angeles."

The term "bicycle friendly streets' is also irking cyclists, including activist Stephen Box, a candidate for City Council. "Bicycle boulevards are one of the 'innovative bicycle treatments' that City Planning staff acknowledge then water down," he said, "offering instead the “Bicycle Friendly Street” knock-off that fails to establish engineering standards for discouraging cut-through motor vehicle traffic, prioritizing right-of-way, and providing traffic control that supports cyclists at the arterial crossings."

Box also believes the city is trying to "sidestep" the federal Complete Streets Act by pushing the plan through before January 1st when it goes into effect.

Lastly, a technical issue has cyclists concerned. The plan says the minimum width of a car lane at 11 feet, even though most lanes are reportedly 10 feet. 9 feet lanes, which can also be found in L.A., are used in bicycle friendly cities. "The Street Sections [of the Technical Design Manual in the plan] need to be updated so they do not hinder bike lane projects," said the LACBC. "If a standard is to be established through the guidelines, we ask that Planning set the minimum vehicle travel lane width at 10′ not at 11′."

Adds Joe Linton, an appointed member of the city's bicycle committee, in an article on LA Streetsblog: "Many provisions in the draft plan make it more difficult for the city to implement bike lanes."

The Planning Commission meets Thursday at 8:30 a.m. at City Hall. If approved, it will move to the City Council for consideration. Today, the cycling community is asking for letters to be written to commissioners and for people to speak up at the meeting.

"Like a herd of cats, the cycling community rarely moves one direction," Thompson said in a letter to Commissioner Sean Burton. "However, on the draft bike plan, LA's cycling community is unified: send it back! The draft, if adopted will leave cyclists worse off."