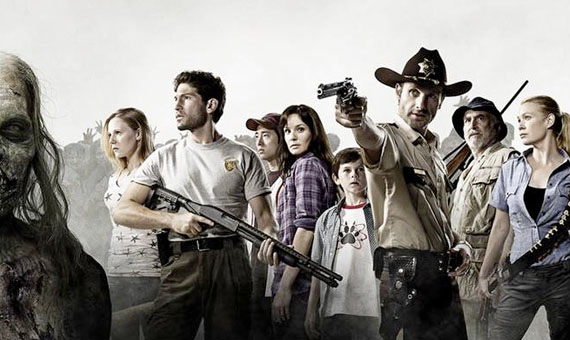 "The Walking Dead" premieres at 10pm tonight on AMC, we spoke with Jon Bernthal (holding the shotgun above) who plays Deputy Shane

One of the most stupid headlines we've seen over the last few months is "Are Zombies The New Vampires?" The answer is: no, they're not. Nobody wants to fuck a zombie, something that perpetually bedevils Randall Skeffington from Comedy Central's "Ugly Americans". There's no reasoning with zombies, therefore no foreplay, etc.

This week we've been enjoying IFC's "Dead Set" which brings an even gorier take on the campy zombie genre to TV by combining it with reality television as zombies invade the "Big Brother UK" studio to horrifying effect. AMC's "The Walking Dead" is another matter entirely. Adopted from a popular comic book, the series is a much more serious character study than you would ever expect but think about it, it's on the AMC network, home to the critics' darlings, the multiple Emmy-winning "Mad Men" and "Breaking Bad". There's plenty of action, however, because we're dealing with zombies attacking the human survivors of some unknown apocalypse, and this is in stark contrast to the cerebral machinations of AMC's "Rubicon" which took almost 2 months for anything to "happen".

There are adrenaline fueled scenes in "The Walking Dead", no doubt, but it's the down time in between the action that were of most interest to series star Jon Bernthal who plays Shane, a deputy in an unnamed town north of Atlanta, when he read the script for the show. You may remember Bernthal from his stints on the TV shows "The Class" and "Eastwick", but it was his performance as Sgt. Manuel Rodriguez on HBO's other World War II saga, "The Pacific", that jumped to mind when we saw him in the promos for "The Walking Dead". American audiences might not be familiar with Brit lead Andrew Lincoln but there are plenty of familiar faces in this cast which includes Michael Rooker, Laurie Holden, and Jeffrey DeMunn.

"The Walking Dead" is a standout show and it's our pick of the night (10pm on AMC). We've seen the first two episodes but we'll be rewatching as we eagerly anticipate seeing something new on the 14th.

LAist: We're familiar with you from your standout performance in HBO's "The Pacific" among what seemed like a cast of thousands.

Jon Bernthal: I'm so glad you enjoyed it. "The Pacific" was a great project, it was one of those dream jobs where you have legendary bosses, where everyone there, everyone on the crew, everyone on the cast, were there to give it their all. I think "The Pacific" is a very similar project to "The Walking Dead" in a way as I think "The Pacific" examined the numbness that comes from being in horrible conditions, in war, and "The Walking Dead" is about the humanity that people find in horrible circumstances, the desperate need to hold onto human emotions, it's really a character piece. Whereas I felt "The Pacific" was about going numb, the process of turning off in the face of horror. The two projects were similar in a weird way.

LAist: From the couple episodes of "The Walking Dead" I've seen it seems like you character, Shane, is going through several levels of emotional involvement: he's got a strong relationship with his partner Rick and his family, he's a survivor, a leader.

Jon Bernthal: It's an unbelievable honor to play this guy. We did hav to change the character, in the comic he wasn't a character that was followed very much, but in the series he's a lot more pertinent to the overall story. I think we try to suggest that Shane is Rick's number 2 guy, he's very comfortable being Rick's pit bull, he'd be comfortable showing up at Rick and Lori's house unannounced for dinner, his support would be unspoken. I think that he and Rick were a very well oiled machine and that they've been together since they were growing up. I think he'd treat Rick's family like his own. He's put in a leadership position with a group of survivors after the apocalypse, a situation he's never been in during his whole life and he rises to the occasion, he operates from a position of morality and conviction but he's forced to go through a lot this season. Every episode presents a new challenge, its an honor as an actor to play a character like this.

LAist: As you tell me about this web of relationships it becomes more apparent that "The Walking Dead" is not a genre piece. It seems like the majority of "horror" films and projects have situations where the characters abandon all relationships and every aspect of their humanity in order to survive, and that's not what this is about.

Jon Bernthal: I really think that "The Walking Dead" is about the desperate need to hold onto these things. There's nothing cute about this, there's nothing campy, we're not winking at the audience, we're trying to do it as real and gritty as possible - everything is based in reality. When I first read this project it didn't come off as a zombie piece, it came off as a character-based, a character-driven piece about a group of human beings and how they react.

I think what the zombies provide in the show is, that with all the jealousy, the power struggles, and all the shit that goes on between human beings, that whatever is going on, when zombies attack it provides an opportunity for humans to completely redeem themselves or to completely fail in each others eyes. You can have an arch-enemy and be in the most desperate and passionate fight in the world but when a bunch of zombies come out of the woods, people team up to save each others lives. You can get that from the comic book which asks: when you strip away all the creature comforts and all the things that we all take for-granted, how will people react?

This is a character piece and that's what is so cool about AMC because that's what they've always done. I really dig their programming and I think that this fits in perfectly with it. "Mad Men", "Breaking Bad", and "Rubicon" are my favorite shows on TV, and to be in that family is not only a huge honor but I don't think they would have put us in there if we were in some campy genre series. We're all really excited about this, we're all really proud of this.

LAist: What were some of your favorite scenes to work on? When you had done a table read were there any moments that really jumped out at you, that made you say "I can't wait to do this scene"?

Jon Bernthal: I definitely don't want to throw any spoilers out there but I will say that I really enjoyed the quiet moments of the show where the central stage of the first season is the survivors' camp. When we're sitting around the fire, the moments where we're eating, the moments where we're trying to make each other laugh, it's a very sparse and sad world that we've created there. It's really interesting as no matter what we're doing is there is always element of loss, this element of sadness, and this overwhelming fear that is always apparent in these people. I love how that underscores the entire piece.

This group of actors is so good, everyone is so good, whether they did just one day on the show or whether they were there the whole time, I think [series creator] Frank Darabont is the best writer out there today. He's a great director but it was a really a pleasure to work with what he's written. I know a lot of actors say shit like that "Oh I love these guys" but this group of people really respected each other and I really loved going to work with everyone every day.

LAist: From what I've seen, Laurie Holden and Sarah Wayne Callies are really great but you get the feeling that anyone could be taken at any time. You really don't know who will make it to the next episode.

Jon Bernthal: That definitely adds to the atmosphere of the show. As actors on the show we know that anytime we get a script that it could be our last episode on the show! That plays a role on set, everyone on this job wants to stay - nobody wants to try to get out of their contract, we all want to be a part of this thing as long as possible. It's tangible in the shooting of this, we're all trying to stay alive. I really do believe that Andrew Lincoln [who plays Rick Grimes], as far as I'm concerned he's the best young actor on television today, as a leader, as a leading man, we couldn't have asked for a more talented actor or a better guy to lead the series. I love the leading men that AMC puts in their shows! They're all so brilliant, really special actors.

It's funny, as an actor you work on a project like a TV or movie and then you have to do a lot of barking about it whether you liked it a lot or not, but I really love working on this show and I'd like people to check out what we did.

LAist: What else can we see you in?