Max Lugavere Wants to Change the World with Rockdrive 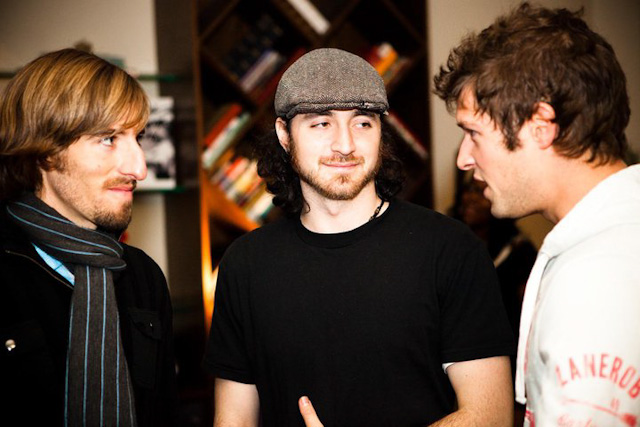 Two years ago Max Lugavere decided to combine two of his passions — world-changing (you may recognize him from Current TV) and music — to create an event called Rockdrive. Two years later, the event has grown into an entire night of music and fundraising at Troubadour on December 11. With an expanded team of co-producers and advisors, Lugavere has big ambitions for Rockdrive and envisions it turning into a broadly distributed DIY-style event in the coming year. We caught up with him to learn more about Rockdrive 2010.

LAist: How did Rockdrive come to be?

Max Lugavere: I founded Rockdrive as a way to use the power of music to bring people together and give back to the community. We want the Rockdrive brand to become synonymous with unforgettable massive music events where the audience members are just as much stars for coming out as is the talent performing on stage.

We want there to be an incredible night once or twice a year and to enable people to leverage whatever notoriety Rockdrive builds.

LAist: What's the format of the event and how do you plan on growing it?

ML: We're going to have plenty of signed artists and we're also developing a program similar to TEDx, so that anyone can host an event anywhere according to our basic guidelines. This will enable anyone from their living room to a community center to ignite a conversation around music and how it can be used to improve the local community.

LAist: What organizations are benefiting from Rockdrive 2010?

ML: We're partnering with Causecast and the funds are going to go toward The Story Project and Communities in Schools.

LAist: Both education-related organizations. Why education?

ML: I think a lot of charitable attention tends to be paid toward communities that are far away from us. But one of the driving forces behind a lot of societal ills is the education problem. Last year when we did Rockdrive at Hotel Cafe it was a dramatic year for LAUSD budget cuts. I knew that through my work with Current and Causecast and it was all over LAist and the paper.

Communities in Schools is the largest dropout prevention organization in the country and is is part of the Causecast network (Causecast, our partner, is a one-stop philanthropy organization). The Story Project is dedicated to engaging young people, particularly those at high risk, through multimedia, film, and poetry. We also independently highlight local schools and what they're doing to reduce dropout rates.

Education is one of those things that you can't understate how important it is. I'm also really passionate about animal rights and in the future we might benefit that but this year we're focusing on these two charities.

LAist: Looks like you've built a nice team of collaborators to round out the Rockdrive team...

ML: The team is awesome! Co-executive produers David Garner and Angelique Sheppard are both musicians and David is a public school teacher in addition to being an incredible musician. Their past-time is arranging collaborative jam sessions with their friends who happen to be signed artists and top LA music talent. They've put together charity events for such artists before so it was a perfect fit to join forces. But this will be the biggest event that they've done.

Jason Silva, my co-host on Current TV, is in, as he was last year, and another exciting addition is Colette Weintraub, who co-founded the (RED) campaign with Bono. She has mind-blowingly awesome experience and will be helping with our marketing.

LAist: There are already ten artists confirmed for Rockdrive 2010. What's left on your wish list?

ML: I'd really love to partner with Take Part and promote Waiting for Superman at the event. It's an amazing documentary and I love everything that Participant puts out. We put the movie poster on the Rockdrive website because I feel it needs to be there -- the film was so great. So we'd love to screen clips of it on December 11.

Rockdrive 2010 takes place December 11 at the Troubadour. Artists scheduled to perform include Aqualung, Cary Brothers, John West, and Angel Taylor with more to be announced. Tickets are on sale now.