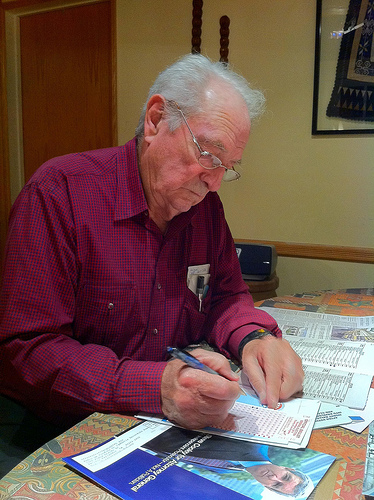 An Angeleno Votes by Mail for the 2010 Election | Photo by Alex de Cordoba via LAist Featured Photos on Flickr
The next time there is a special city council district election in Los Angeles, it could end in dramatically different results. Not necessarily about who is elected (there's a chance of that, though), but regarding turnout. The L.A. City Council today voted to draft an amendment to the election code that would authorize an all vote-by-mail election.

Currently to vote by mail, a registered voter must request the ballot, fill it out and return it by a deadline. In a vote-by-mail election, however, it takes away the first step by automatically sending all registered voters a ballot.

Today's motion directed the City Attorney to create an election code to enable a vote-by-mail experiment. If approved, the next single district special election after six months — that's how long an election code must be posted before taking effect — would be both a full vote-by-mail election, but supplemented with all regular polling places, which were kept in place because of concerns that the drastic change would confused voters.

After that election, an evaluation would be created to see if voter turnout increased or not. From there, City Councilmembers would decide on expanding the program.

"I think we will see the benefits and voter participation increase should we send all voters ballots," said Councilmember Jose Huizar, who authored a motion to create a vote-by-mail measure on the March 2011 ballot. Because of concerns voiced by fellow councilmembers, his idea was canned in lieu of the experiment.

Besides the possibility of increased voter turnout, an all vote-by-mail election with no polling places -- rather, neighborhood voting centers where you can drop off your ballot -- could decrease costs. A study of the 2009 special election in Council District 2, in which Paul Krekorian was elected, revealed that if it were a vote-by-mail election, the city would have saved $562,000, a 31% decrease in spending (the election cost about $1.8 million)

The City Attorney's report is due back to Councilmembers shortly.

Related: The Future of Casting a Vote in L.A. Might Include Ranked Choice Voting and Vote-By Mail Elections