A Historic, but Expected, Vote: Westside Subway Extension to Just Past 405 Fwy Approved 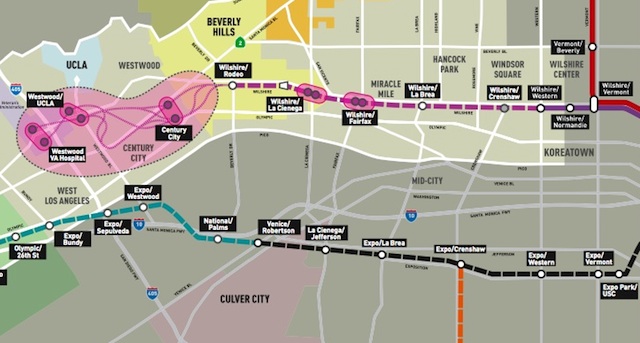 Metro staff recommended Alternative 2, which terminates at the Veterans Administration | Map via Metro

It's been on and off, delayed, banned and fought over for decades, but it has finally happened. The Metro Board of Directors this morning unanimously approved extending the Purple Line 9.5 miles to just past the 405 Freeway. It was one of five alternatives to choose from — others included a West Hollywood spur and taking the subway all the way to Santa Monica.

It will take 25 minutes to travel between Union Station and the Veterans Administration Hospital with seven new stations. Approval of the most talked about parts of the project — placement of the Century City and Westwood stations — however, were pushed for further study.

As for the controversial location of the Century City station, a motion (.pdf) by L.A. County Supervisor Zev Yaroslavsky requesting "staff fully explore the risks associated with tunneling under [... Beverly Hills High School]" was approved. Although he believes a station in the center of Century City is more appropriate — "it's the center of the center" after all — safety was his number one concern.

Today's vote pushes the $4.36 billion project (that's in 2009 dollars) into its final phase of study before construction can begin, which will likely happen in 2013. Following that, opening dates would be based on funding. As it stands now, it would open in three phases: 2019 for Fairfax, 2026 for Century City and 2036 for Westwood. But if Mayor Antonio Villaraigosa's 30/10 plan, which envisions the federal government loaning the money upfront, thus accelerating the project and others into a 10 year period, goes through, the full subway could open in 2022.