Mark Z. Danielewski’s ‘The Fifty Year Sword’ to Make Its US Debut at REDCAT on Halloween 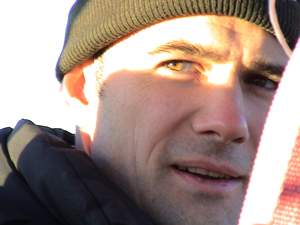 The 90-minute program promises to be an “evening of whispering voices and the intricacies of malice foretold and retold.” Danielewski, Betsy Brandt of Breaking Bad, and other guest performers will narrate the story, while shadowcaster Christine Marie will complement the tale with large-scale cinematic shadow effects.

Part of the lure of this illustrated ghost story is the fact that it’s so rare. The book was printed in the Netherlands and its English run (1,000 first edition and 1,000 second edition) was so limited that some first edition copies have sold on eBay for more than $1,000.

What's the story? A brief synopsis: “The chills begin on a late October evening at an East Texas ranch when Chintana, a seamstress recovering from a painful divorce, encounters a shadowy caped Story Teller recounting for five orphans a tale of revenge, a harrowing quest, and a terrible sword, which everyone soon realizes waits before them, concealed in a long black box, honed for new crime.”

A limited number of second edition books will be available for purchase at the event ($50), and Danielewski will join patrons in the lobby for a book signing following the performance. In addition, three copies of the book will be given away at the show, and one copy is being given away online.

In addition to this event, Danielewski has been very busy since LAist spoke with him about Only Revolutions back in 2007. At the time, when asked about his next project, he said, “Right now I’m working on something that has no textual shape.”

It appears that things have definitely taken shape since then. Last month it was announced on his message boards: “Later this month publishers will receive the first 5 volumes of Mark Z. Danielewski’s 27 volume project entitled The Familiar. The story concerns a 12 year old girl who finds a kitten…” A few days later Danielewski revealed via Twitter that the first five volumes were shipped on two iPads.

We can’t wait to learn more. In the meantime, don’t miss The Fifty Year Sword at REDCAT (inside the Walt Disney Concert Hall complex) at 7 p.m. on Sunday, October 31. Tickets are $15 for general admission and $12 for students with current ID.