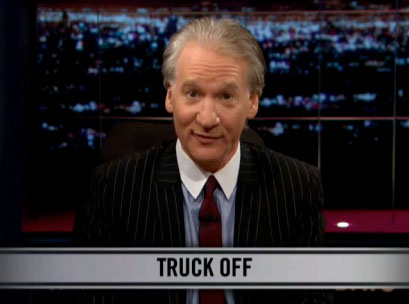 Rob Reiner and George Clooney will be featured guests on "Real Time With Bill Maher" tonight at 10pm on HBO
This weekend will again be a tussle between sports programming and other TV, particularly the baseball division championship games which have been in the top 5 in terms o ratings. Saturday is again a wasteland with merely Sundance's "Iconoclasts" and NBC's "SNL" (Emma Stone (who?), Kings of Leon) making it onto our radar.

We feel like there is more wriggle room on Sundays now that AMC's "Mad Men" and "Rubicon" have completed their seasons but we're forever presented with the dilemma of HBO's "Boardwalk Empire" vs Showtime's "Dexter" and we realize that this isn't a coincidence. Thankfully both of these excellent programs have their episodes repeatedly aired during the week so there is ample opportunity to watch them if you didn't catch them "live". ["Dexter" fans, please note that Showtime has just launched a new "Crime Scene Page" to keep up to date with the program and community.] "Bored To Death" (Sunday, HBO, 10pm) promises to be great and we've been told that there are hints of Mark Twain and other surprises in store for us in this collision of comedy, literature, and insanity.

---
Another media personality got the axe this week and this time it's NPR's Juan Williams who was terminated after making bigoted comments this Monday on Bill O'Reilly's Fox News show, the home of bigoted comments. Williams is now saying that NPR had been looking for an excuse to fire him because they said he had crossed the line before, so why did he cross that line? Still, he had put in more than 10 years at NPR so he must have been doing something the network liked and they should have at least heard him out or let him clarify his statements or recant them. By the way, prefacing a bigoted statement with "You know, I'm not a bigot..." doesn't make the statement any less bigoted (sorry Juan).

To say that NPR has been inconsistent in their enforcement of their ethics code wouldn't be accurate either, however, as they have, for example, banned all reporters and correspondents from attending the Comedy Central "Sanity" rallies in Washington D.C. later this month. But there is something about these quick firings that seem knee-jerk and unreasonable, whether it is CNN, NPR, or CBS, and that puts even more pressure on the already confusing and untenable profession of journalism and that's not good for the American public.
---
NBC's "School Pride" (Friday's at 8pm) is partnering with Microsoft to provide a middle- or high school with a computer lab - details for entry are available here. We're not sure if burdening kids with the Windows operating system is helping anything - aren't these schools having enough problems? What we're saying is that this is a hint to Apple to provide a matching or better package.
---
The TV Junkie Plan: Tonight - "School Pride", "The Good Guys", Bill Maher (Rob Reiner, George Clooney). Saturday - "Iconoclasts", "SNL" (Emma Stone, Kings of Leon). Sunday - "Nature", "Dexter", "Bored To Death", "Eastbound & Down"

10:00pm The Increasingly Poor Decisions of Todd Margaret IFC - Todd's boss arrives in London demanding all the money from Thunder Muscle sales, and Todd oversees the filming of his commercial.

10:00pm Sanctuary Syfy - Will suffers from amnesia after his near-death experience; visitors are intent on finding out what is in his memory.

10:00pm Dean of Invention Green - Season Premiere. An era of tiny robots that are able to enter the bloodsteam to find and kill cancer cells.

8:00pm Nature PBS/KCET - A Murder of Crows Research indicates that crows are among the most intelligent animals in the world.

8:00pm First Life With David Attenborough Discovery - The evolution of the first animals to the modern creatures we know today.

10:00pm Luther BBC America - Luther must outsmart a sniper on a mission to gun down police officers; Luther discovers Alice has been investigating him.

10:00pm Bored to Death HBO - Jonathan tries to repair the relationship between a limousine driver and his wife; Ray has a meeting with Kevin Bacon.