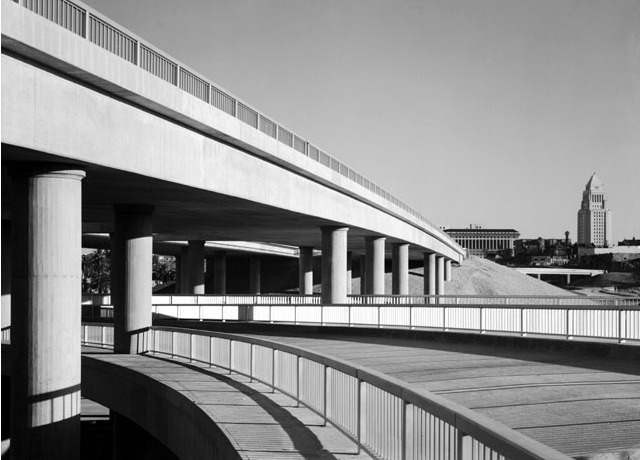 He took man-made behemoths, turning them into art, and on Friday, the world said goodbye to Richard Crump Miller, famed photographer who profiled the city's rise from farm to concrete jungle taking time to also shoot the glitteratti. He was 98.

"Miller's work...included a young model later known as Marilyn Monroe posing as a bride and James Dean on the set of the 1956 movie 'Giant,'" Valerie J. Nelson wrote in her obit for the L.A. Times. "Dean and the photographer bonded over mutual ownership of Porsches, Miller later said.

"There were also images of an evolving Los Angeles, 'snapshots of a city coming into its own,' The Times said earlier this year, as well as Miller's signature prints made with the Carbro process, a complex and now-arcane color-printing technique that produces vibrant archival-quality prints from pigments rather than dye."

His bio and a link to Miller's photographs below the fold:

Richard Crump Miller was born on Aug 6, 1912 in Hanford, CA, to Ray Oakley Miller and Laura Belle Crump Miller. As a child, Miller’s interest in photography grew from toying with his father’s 3¼x4¼ folding roll-film camera. In 1929 Miller was introduced to Leica and Graflex cameras and began to study cinematography while attending, successively, Stanford University and Pomona College. Miller ended up graduating from USC where he met his wife, Margaret.

In 1935 Miller pursued acting at a community theater where he also shot photographs of fellow players with a borrowed Leica before upgrading to an acquired Zeiss Contax I 35mm camera. When Miller traveled to New York looking for work as an actor he showed his photographs to Edward Steichen who praised and encouraged him to stay in New York and work in photography. However, in 1937, Miller stopped temporarily in order to return to Los Angeles and marry Margaret.

In 1939 Miller officially left acting for a career as a photographer. He learned the tri-color carbro printing process out of a book and purchased a one-shot color camera that enabled him to capture live subjects. He then converted a bathroom in his parent’s home into a makeshift darkroom to process advertising and commercial photography—which made him the only one in his field both working in carbro and processing his own prints.

Read the entire biography here and see more of Miller's work at his website, richardmiller.com.