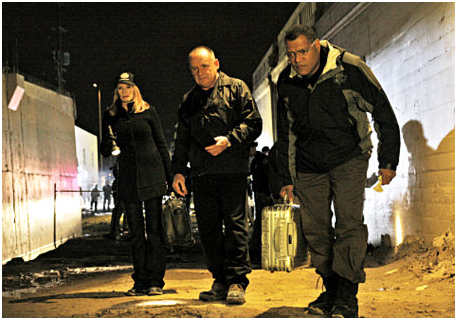 Tonight the "CSI" team attempts to track down the elusive and just plain creepy, forensic-proof killer Sqweegel (8:55pm on CBS)

While the world might be in a tizzy about the broadcast of the Chilean miners' rescue, didn't we do that already with Baby Jessica back in the '80s? We also read online that the O'Donnell/Coons debate in Delaware was a disappointment because no actual witchcraft manifested itself - the last time that happened was when George Bush II wore an infernal device during the 2004 presidential debates. So we've been there, done that as well.

Tonight on CBS' "CSI: Crime Scene Investigation" (8:55pm) there will be a first, there might even be firsts (plural). "CSI" franchise creator Anthony Zuiker published his novel, Level 26: Dark Origins last year and called it a "diginovel" because of online content and clues available at Level26.com that were integrated with the book's chapters. Today the second Level 26 novel, Dark Prophecy, hits bookstores and it features even more rich content and an iPad application that will allow fans to collect clues and explore the world of protagonist Steve Dark and the serial killers he pursues. Not just-coincidentally, in tonight's "CSI", one of the killers from Dark Origins, the creepy, latex-bodysuit-clad Sqweegel, is pursued by the CSI team with an ending that carries over to Dark Prophecy. Zuiker has truly created characters and stories that cross from books to TV to the internet and back again - what's next? Movies?! Something along that line might already be in the works from this prolific creator.

Zuiker explains more in our interview below. Be sure to check out the promo clips for tonight's "CSI" episode as well as for Dark Prophecy (at the end of this post). After the show airs tonight, Zuiker will be doing a live chat to discuss the episode and its connections to his books.

LAist: Tell us about the literature-to-TV-to-literature crossover that will be happening tonight on "CSI".

Anthony Zuiker: What's exciting for us is that we've extracted a villain from Level 26: Dark Origins, called Sqweegel, our forensic-proof killer. We ended the book with finding a black Sqweegel suit, a latex forensic-proof suit, in the Fontana di Trevi in Rome, only to suggest that there's a cliffhanger version of what the next book is. Tonight, that Black Sqweegel will be appearing in "CSI" as a the forensic-proof killer. Ann-Margret will be starring in the episode, and we'll be trying to capture the killer, but when this episode ends, it will continue in the book Dark Prophecy which drops today!

Now I can't be too specific on that or I'll be giving everything away, but it's the first time, I believe cross-platform-wise, that the author of a [TV] franchise and the author of a book franchise, has taken a villain out of a book and put it on a show he's created that will then continue on a book that drops on the day of the episode. So it's pretty exciting in the cross-platform arena, from broadcast to book.

LAist: I noticed in the book Dark Prophecy that you have these digital bridges as well as an iPad app that help with the crossover.

Anthony Zuiker: Yes, well we're doing an iPad now after doing an iTouch app last year for Dark Origins. I think reading books on the iTouch could be a bit challenging but the iPad opens up so many more possibilities. We will release the app later this fall but it won't be out in time for this episode.

What we're doing is giving the iPad user 3 experiences: 1. a straight Kindle type experience, where you are just turning a page. 2. to turn pages but every 40 pages or so, begin to watch sections of a motion picture that we shot - we shot a 1 hour movie for Dark Prophecy that is broken up into 11 segments; and the 3rd experience is reading the book, watching the 1 hour movie, and then collecting evidence while you are reading and playing with Tarot cards - you can move the cards around, manipulate them and other content, and there are hidden messages inside the Tarot cards. It's very interactive.

My philosophy for engagement in terms of content on the iPad, is to lick the core experience and provide these other options to consume. I've been very public in the press about the "diginovel", but buying a book, putting it down every 25 pages, logging into a website to enter a code to get exclusive content, watching a clip, and then returning to the book, can be a very cumbersome process. The difference between Dark Origins and Dark Prophecy is that the first book has 20 out-of-context motion pictures scenes that act as speed bumps through the narrative but the second book has a 1 hour continuous movie where you can watch this personal journey of the Tarot card killer which informs you about our main character Steve Dark. It's much more integrated, it's a much richer experience.

LAist: What's really interesting about your effort is that so many things are coming together this fall: we have the first edition of the New Yorker designed specifically for the iPad, and we've had a recent Wall Street Journal article on how much cheap e-books are affecting the ability of authors to make a living from making "plain old books" and that they have to create an experience beyond words on paper. What is your opinion on these developments?

Anthony Zuiker: What you're witnessing is the extinction of the printing press. I pick up newspapers and I find them a pretty poor way to receive news and information and I also recognize that there's a severe limit in the way newspapers and print can make a profit. As an author, I never want to see the written word restricted. Do you think books will be in stores for ever and ever? I don't think they will be but they might be around for a long time. But I think that people want more from their one-off experiences and when you make devices as fanciful as the iPad it lets creators like myself get creative and offer options for people to engage with the content.

The old saying is that if you create something for everybody then nobody will want it but I don't think that's true if you give people different ways to consume your work. I think that there will be articles that will be written that will offer you other content to watch, and the article or story will alert you when new or related content becomes available .

I think this is a great time to be an author because this technology can't write the words for you, you still need human beings to write engaging stories. But people want information that evolves and is current and I think newspapers are behind and are a piece of literature that won't be around much longer as technology evolves.

LAist: Have you checked out the iPad apps for other shows?

Anthony Zuiker: Yes, I got the Alice In Wonderland app which I thought was very interesting. I really appreciated the fact that they used the apparatus to embelish the visual experience. I took a lot of notes on that for Dark Prophecy. Have I licked the diginovel and implemented the fullest level of interactivity for Dark Prophecy? No, I still have a lot to learn but we've made significant strides by figuring out what people in the market like and don't like.

At Leve26.com we've been growing a community of loyal viewers who are consuming and contributing to what we're putting out there. I think we can get to the promised land through our community alone and everything after that is gravy. I think we're seeing a tremendous shift in how people are buying books.

There's already several million iPads out there but there's going to be many other kinds of tablets out there and I think that those are absolutely going to be a fixture in the future.

LAist: Tonight's crossover is an experiment, do you have a plan to do more of these?

Anthony Zuiker: That's a tough one. I'm dedicated to the fans of "CSI" and the fans of Level 26. I think once America sees this show and if they give the book and the franchise a try, then we're on to something. The great thing about TV is that you're always just one episode away from getting creative with a book tie in, maybe people will love the villain and will want him to come back, or it could spawn another book idea or linking the show with another book. We all know that the greatest thing about book sales is word-of-mouth and tonight I'm trying to get a 16 million viewer head start and see if word-of-mouth catches on.