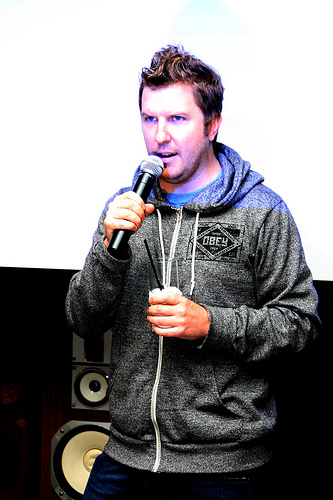 Nick Swardson at last night's screening party for "Nick Swardson's Pretend Time" - he's actually much friendlier than the dramatic lighting suggests
You've seen Nick Swardson as the recurring character, the ambiguously heterosexual Terry Bernadino (pic below) on Comedy Central's "Reno 911!" for years as well as in several films, from Malibu's Most Wanted to You Don't Mess With The Zohan and now he's getting his own sketch show.

Yes, Comedy Central has given the writer/performer a 1/2 hour slot on Tuesdays, starting October 12, to do what whatever comes into his head and the results are pretty twisted. "Nick Swardson's Pretend Time" includes paraplegic cats, Lady Gaga's policeman brother, and men sticking their penises into bowls of piranas are just a few of the things you'll see in the first episode. And that's not even the fun stuff according to Swardson whom we spoke last to at a screening party in New York City's Ace Hotel. "The first couple episodes we were just setting up the rhythm - wait until the 5th and 6th, you haven't seen anything yet!"

Thankfully we had a chance to talk to Swardson on the phone last week to more clearly go over the origination of "Pretend Time" and who else is involved with the show. "Nick Swardson's Pretend Time" premieres at 10pm on Tuesday, October 12 - watch for Swardson's appearance on "Late Night With Jimmy Fallon" tonight.

LAist: For quite some time we just had access to you as Terry on "Reno 911" so it's great to see that all these other characters were living inside you. I know that you've had some parts in movies and writing gigs but this show is all yours, right?

Nick Swardson: Yeah, my agent and manager were baffled as to why I wanted to do this because I had projects like movies and other options but I really had all these other things in me, I've been a sketch fan for years, but I jumped at this opportunity. The work was very very hard but creatively it was amazing.

LAist: How did the show come about?

Nick Swardson: My friend, Tom Gianas, who ran the show "Human Giant" and was a "SNL" writer, and the director of the pilot of my "Gay Robot" project, asked me if I wanted to do a sketch show. So he pitched me the format and it was really cool. It wasn't like a stand-up comedy show that you might usually see on Comedy Central or even the other sketch shows where the somebody has to come out in front of an audience before looking at the sketches. So we pitched it to Comedy Central and they went for it, we didn't even have to shoot a pilot based on Tom's track record and the fact that I've known them forever.

Nick Swardson: Yeah, I've been involved at every step. I trusted Tom implicitly with the direction, he's so brilliant, but I really give Comedy Central a lot of credit for letting me do this: giving somebody with a comedic voice the chance to stamp their mark on a show in every aspect.

LAist: There's so much variety in the sketches and there are so many of them in each episode, did you have a couple notebooks that you've been filling up over the years that had been waiting for an opportunity like this?

Nick Swardson: No, not really, it's all really fresh. I did have some older ideas but we never ended up using any of those. We had to generate a lot of this from scratch.

LAist: You really push some limits with "Pretend Time" - nothing seems sacred: you have a donkey show, a child with a fatal diagnosis, and others.

Nick Swardson: A lot of people could think of this stuff as sophomoric or juvenile but there's a method to all of this madness. Yeah, it's a donkey show with a donkey jizzing all over the place, but the context is that there's a sexual harassment meeting going on at a donkey show. There's a skeleton, a framework around these sketches.

LAist: Did you have some favorite sketches that were a lot of fun to shoot?

Nick Swardson: We had so many, I was really fortunate to be excited to come to work because "Ohmygod we're doing this one today!" One was with Kerri Kenney from "Reno 911!" and another was with Adam Scott from "Party Down" who plays a CNN reporter who's interviewing me and I play a hiker who gets lost for 24 hours and resorts to doing horrible things to try to get found: I light my hair on fire to attract the attention of a helicopter, and all these other horrific things and he's just baffled - that was so much fun. It was really a dream to work with talented people like Adam and Kerri, oh, and Ryan Phillippe has an amazing cameo but we also have a lot of new talent on the show, people who are so good, it was a pleasure to work with them.

LAist: You have such a benign and friendly mid-Western face and open personality, but these sketches are totally twisted, it's a crazy juxtaposition.

Nick Swardson: Yeah, I am from the midwest, my Mom will be just so horrified with this show. But this is "Pretend Time", I hope people are watching it 'with me', like I'm the class clown and I'm doing this to make people laugh but they're in on the joke. 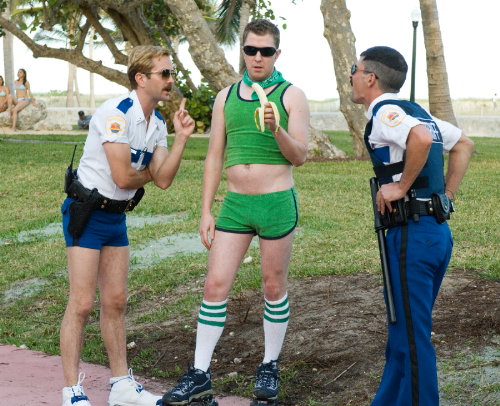