Use Your Cellphone While Dining Out? 67% of Your Fellow Diners Think You're Rude 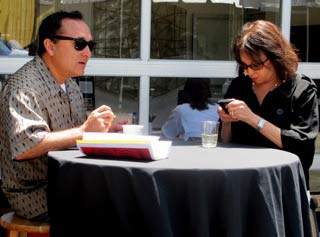 Photo by Lucyrk in LA via the LAist Featured Photos pool on Flickr
Can't part with your cellphone while having a meal in a restaurant? Using cellphones for conversation, texting, or engaging in social media while at the table has become what Zagat co-founder Tim Zagat calls "part of the changing culture of restaurants," according to CBS.

The most recent survey of Zagat diners indicates that 67% of Angelenos think that "texting, checking e-mail or talking on the phone is rude and inappropriate in a restaurant." Comparatively, of those participating in the annual survey, which results in the Zagat Guide, 64% of New York City diners and 63% of San Francisco diners find the phone-at-the-table use annoying, too.

While using cellphones while dining out can annoy your table-mates or those around you, few businesses prohibit their use, or intervene when a customer's use is disturbing, unless, points out Tim Zagat, "you’re shouting while you’re on the phone."