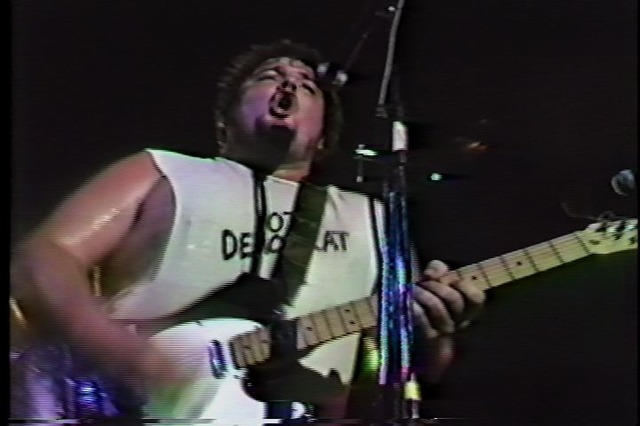 Every Tuesday night during the month of October The Redwood Bar and Grill will be screening Dave Travis' A History Lesson Part 1 along with assorted live bands. If you are unable to make it to any live shows, the DVD will soon be available.

A History Lesson Part 1 is your standard interview-slash-live performance music film. That is about the only thing about this film that is standard. Each performance is uncut, allowing you to get into the groove without any annoying voice-overs or cut-aways.

The film focuses on four popular bands of 1984: the Meat Puppets, the Minutemen, Twisted Roots and Redd Kross. Interviews were conducted by Dave Travis, Dave Markey, and Dave Jones, who are all close friends of the subjects. It allows the interviewees to open up in a way that would be impossible with any other film crew. Their openess offers insight into tours, songwriting, recording, and the cult of SST.

It is amusing to hear Jeff McDonald of Redd Kross describe the Meat Puppets' music as "witchy", Paul Roessler of Twisted Roots comparing the '77 Hollywood scene to the '84 South bay scene, and the Meat Puppet's Curt Kirkwood's pronouncement that "There are punks who haven't been born yet who are way punk."

Perhaps the most fascinating element of the interviews is hearing the bands discuss the other bands. Although they discuss Black Flag™, live footage of the band is noticeably absent. Maybe it is locked away in the Disney™ vault. Anyone familiar with SST™ might assume that the reason behind this obvious omission is a certain person who famously guards Black Flag™ footage. For the sake of us all, Greg™, release the Black Flag™! Let it fly free for the greater good!

The one criticism I hear about History Lesson is the bootleg quality of the music. The thing is, that's often what it really sounded like. Especially at the Cathay, where the sound man would just wander off. That's why SST bands took their own sound guys on tour. And camcorders hadn't even been invented yet. Dave Travis jerry-rigged a home VCR through a battery belt.

It is amazing he got the footage he did, considering he was a high school kid standing in the pit with the rest of us. That's part of what makes this movie special. People say "You had to be there." This film gives you the next best thing. You are able to get the feel of standing with the throng, worshiping at D. Boon's guitar pedals.

When D. Boon, who was incredibly nimble for his size, breaks into one of his trademark dances during "The Big Foist" it is pure magic. At that moment in the film, I realized I don't care that I was constantly in trouble for breaking curfew and missing classes because I was there. And thanks to A History Lesson Part 1 now you can be there too.

Previously on LAist: We Learned Punk Rock in Hollywood