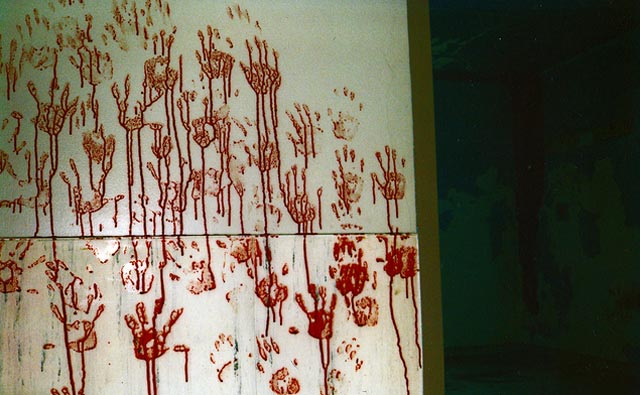 Photo by lostlosangeles via LAist Featured Photos on Flickr

According to Unsolved Mysteries (no, not that one), Los Angeles is the most haunted city in California! Hard evidence is hard to come by in the paranormal realm, so instead, here's a starter collection of haunting accounts from books, blogs, friends and hearsay. Call it bullshit, call it bologna, call it mind trickery or group hysteria, just don't call me crying when a freezing cold vapor-mist tries to push you out of a fourth story window in the Alexandria Hotel. You've been warned.

The Paul Bern Death House of Beverly Hills is a weird one. He'd been married to Jean Harlow for only two months when director, screenwriter, and producer Paul Bern was found naked and shot in the head inside his home at 9820 Easton Dr. Death motive theories include: suicide due to impotence, murder by crazy ex-wife, and murder by MGM's studio manager. Gripskipper reports claims from Creepy LA that, "subsequent owners have reported sobbing and the sounds of a struggle from the location of the shooting," and also that Sharon Tate stayed here, telling friends she was awoken "by Paul Bern's ghost, who showed her a vision of herself, tied up and slaughtered."

The Queen Mary is certified haunted according to the countless seekers who claim to hear voices, rattling chains, and maritime clanking on their paranormal ghost tours and overnight stays. If that doesn't sound creepy enough, simply pay someone to scare the bejeezus out of you at their Shipwreck Haunted House event. After a spin through the Ministry-soundtracked, boat-bowels maze, you will BEG for a haunted room. You will also be peeing yourself. Gross.

Dan Ackroyd cites his former haunted Los Angeles address as the inspiration for Ghostbusters. However the house at 7708 Woodrow Wilson Drive is probably not brimming with Zuul, it's more likely the former owners Mama Cass Elliot or Natalie Wood.

Despite architectural arches and rows of romantic lampposts, Colorado Boulevard's "Suicide Bridge" has a less than glamourous past -- it's said the bridge claimed the life of a construction worker during completion, as well as many greatly depressed Great Depression jumpers who continue to haunt the location and Arroyo Seco below.

And who can forget the Enchanted Forest. If you like to be chased by red orbs and headless apparitions through hots spots in a tar black forest, make sure to add this vaguely located woodland treasure to your map.

Really? You need to be told not to build on the Ballona Wetlands? Not building on wetlands seems like an obvious gimme, especially when those wetlands are found to contain human remains a from Native American burial ground. Didn't anyone see Poltergeist? Construction crews and locals have reported strange mists and a plague of unexplained problems.

Mobster tales, prohibition-era folklore and Great Depression suicides have lead to rumors of underground tunnels and major spookings at the historic Alexandria Hotel. LAist operatives went to investigate a while back and spoke with residents who reported chills in front of the Rudolph Valentino suite and someone touching their hair in the middle of the night... could be a mouse?

Addressing these allegations, the team spoke with a security guard and several employees who confirmed supernatural sightings of a little girl walking around in a white gown, as well as access to said tunnels (our not-so-fearless ghost hunters found only blocked access when they tried to get downstairs).

Continuing their shadow quest, the team found a room closed for construction and was quietly let in by their newly befriended security guard. Inside, they heard phantom footsteps from a room upstairs that was said to be empty and closed off. Then, "in the dark corner, we all saw this white glowing mist. We thought it was a trick so we shut the door and it was still there. OF COURSE I ran out screaming."

The energy in the ballroom was also deemed unsettling, with several explorers reporting unusual headaches. They were told the ballroom mirrors are known to show an unexplained image of a lady and were slanted oddly as not to reflect each other.

Similar sights and sounds, doors and elevators inexplicably opening and closing, spectral apparitions, and decidedly creepy vibes were also reported at the PE Lofts, Mercantile Lofts and the Cecil Hotel (where the Night Stalker serial killer, Richard Ramirez, once lived).

The Forever 21 offices downtown also appear to be a portal to the dark side. According to an employee, the building was formerly some variety of a mental facility as evidenced by the marketing department occupying the padded rooms. Insert joke here. We were told that stylists and reps keep clothes for photo shoots in the floor to ceiling padded chamber with a single, thick window and a giant lock. Employees reported seeing a vanishing girl inside late night and for some reason they don't like to stay there after dark anymore.

If I were Michael Jackson I would totally haunt the Thriller house in Angelino Heights. And then moonwalk to the Pantages if I got lonely.

Tell us your ghost story in the comments below.