Villaraigosa Back in D.C., Wants Transit Money for L.A. 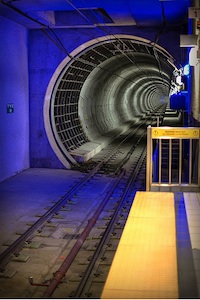 Soto Station on the Gold Line | Photo by Non Paratus via LAist Featured Photos on Flickr
It's round two for Los Angeles Mayor Antonio Villaraigosa. He's in Washington D.C. today rallying for rail in a Senate committee meeting, says KPCC. Last week he did the same in the House of Representatives.

It's all about his 30/10 vision, which would take 12 projects — the Westside Subway for example — planned for completion within 30 years and finish them within 10 years with a $30 billion bridge loan from the federal government. L.A. County can guarantee paying it back because of Measure R, the 2008 voter-iniatied half-cent sales tax increase that pays for transportation projects.

Great idea, but one problem. Such a program within the federal government doesn't exist yet.

"At a time when we’re looking at historic deficits and debt," Villaraigosa told a panel of Senators, "we need creative financing mechanisms to incentivize localities."

Senator Barbara Boxer says there is support from the Republican side of the aisle. Her Transportation Committee will begin working on a multi-year transportation bill this year.