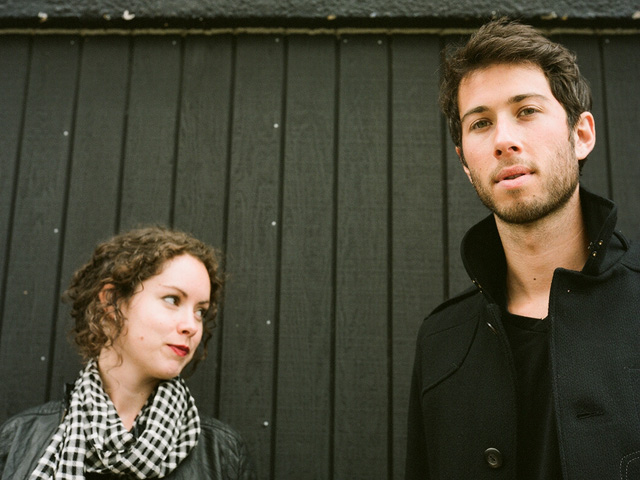 It seems fitting that Peter Murray and Jennie Wayne of the band John Heart Jackie recorded most of their debut record, We Are Gold Mounds, at a vineyard. The nine soft-yet-striking songs pair perfectly with life's most delicious moments.

The Portland-based duo first met when they collaborated on a handful of Sam Cooke covers. Though they never released that album, an EP called Women & Money soon followed. On the new record, they're joined by special guests such as Luke Reynolds, Ryan Dobrowski and Luke Ydstie of Blind Pilot, and Mat Davidson of The Low Anthem.

LAist recently sat down with the band just after their set at Echo Curio in Echo Park. During the midnight chat over donuts and coffee, they opened up about the new album, vineyard recording and their latest touring adventure.

LAist: You have some great instruments on the album, such as the saw, mountain dulcimer, autoharp and melodica. What's one moment that really took you out of your comfort zone and made you proud of the end result?

Jennie Wayne: Probably when we used the dulcimer. That's something we'd never done before and it's an instrument I'd never performed with or written on. In the beginning, it was trial and error, but with a lot of advice from other people, I think we pulled it off.

Peter Murray: Dulcimer definitely wins for "most harrowing instrument on the album" because recording it was quite a challenge! 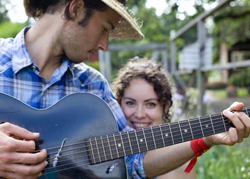 Peter Murray and Jennie Wayne
Is it true that you recorded your first EP in a shed and this album at a vineyard?

Peter: Yeah, the shed was a garage behind my house that a friend of ours has transformed into an art studio. And Jennie's family has a beautiful vineyard outside of Portland. For this album, we recorded a lot out there, then did the overdubs and stuff back at home.

How did where you recorded affect the music itself?

Jennie: On this one I think it made a big impact. It was really nice to be able to truly get away from the city, turn off my cell phone and spend time outside. We'd both do our own things in the morning then have lunch or go for a walk and get back to it. There was a lot of individual creation time. It was so quiet and so beautiful. It was the first sunny week of spring in Oregon, which was refreshing after a long winter.

Even after going through the recording and mixing process and hearing those songs so many times and tweaking them ever so slightly…the ones we recorded at the vineyard still feel really special.

Peter: There really is something in those—especially the ones we wrote and recorded in their entirety at the vineyard.

Peter: "For Olivia" is one. And because of where we did it, there's quite an energy to it.

Were those birds in the background recorded at the vineyard?

Peter: Yeah, we stuck a microphone out the window. I have this awesome rain thing with dogs barking, though we didn't end up using that. Field recordings can be amazing. Maybe our next record will just be a 30-minute storm. (laughs)

"The Canyons" sounds like a folk song that's been passed down through the ages. What was the writing process like for that one? Is that an instance where Jennie's degree in cultural music history came in handy?

Jennie: That song was birthed at the vineyard, too. I went on a walk up to the top of the driveway and back. For a while I had wanted to write a song like that—my take on a traditional-sounding song. I came up with a fragment of a melody, and after sitting on it for a while I was finally able to finish it.

Who do you look up to nowadays when it comes to that kind of songwriting?

Jennie: Gillian Welch is the perfect example of someone who has it. She understands the essence and musicality of that time. People like Gillian inspired me to give it a whirl.

Peter: On the EP we did, the last song "Careless Love" is a traditional song that Jennie rearranged. After that, we had this idea that we should end every album with a traditional song. I didn't know she was working on something like that for the new album, but I e-mailed her one day and said, "What if you wrote a traditional song?" I knew she could do it even if I couldn't. Then she wrote me back and said, "I'm working on one right now!" 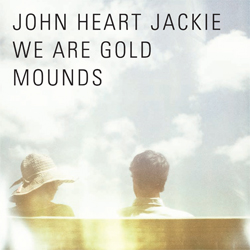 John Heart Jackie's new album.
Is that your usual process—you each write songs then share them once they're finished?

Jennie: That's kind of how it's gone. With our first EP, we brought separate things to the table and combined them. This one was a bit more collaborative. We got to hear each other's songs from the beginning so we could offer some tips and have more of an influence during composition time.

Peter: I imagine that as time goes on we'll do more collaborative stuff. A lot of times I'll play something for her and she'll say, "You need to go up with the melody…" She's good about the things I'm not good at.

You first got together to play Sam Cooke covers. How did that go?

Peter: We recorded "Bring It on Home to Me" first, and we thought, "Oh, this is awesome." Then we listened back to it and it wasn't so awesome.

Jennie: But it was a really good learning process. That was the first thing we'd ever done together musically.

Peter: That was more for fun. Then one day Jennie asked me, "Why don't you play me some songs you've written?" I'd never sung in a band; I was usually the guitar player. So we played some songs together and ended up recording the EP. That was the beginning.

When it came to this album, how did the special guests get involved?

Peter: Those are just our really talented friends who offered their services for free. For instance, Ryan Dobrowski from Blind Pilot has an art studio in the shed where we used to record. He even left his beautiful drum set at our house, so we used that on the album. Our friends are so nice.

John Heart Jackie - "You've Been on My Mind"

Do the two of you often get called John and Jackie? Is the band name a Kennedy reference?

Peter: We do get called John and Jackie all the time. And what's really awesome is that John Mogielnicki (bass, drums, mandolin, saw) is now touring with us, so it's all mixed up. We were in Davis, Calif., and introduced John to someone and they said, "Oh, you're John…" And he totally played along.

It's not really related to the Kennedys, though that's what my mom thought. I thought of that band name years ago when I was trying to come up with another band name. It just seemed to work for us.

What's the story behind your label name, Pour Le Sport?

Peter: I took the name from a story by Sally Benson that ran in The New Yorker during the 30s. I was really into J.D. Salinger at the time I chose the name, and I read that he really liked that story, so I tried to find it on the Internet. I just liked the way the phrase looked and sounded. 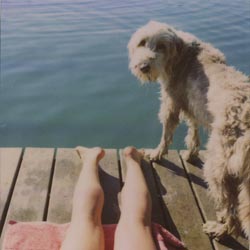 Polaroid from John Heart Jackie's album booklet.
There are quite a few Polaroids on your MySpace pages. Peter, given that you've worked closely with the band Pink Martini [as their marketing director], is that a hobby you picked up from Thomas Lauderdale [LAist interview]?

Peter: Yeah, Thomas was the one who got me into all of this and some of the cameras I use were gifts from him. I take a lot of Polaroids and it's definitely a theme with the band. The cover of the album is a Polaroid that our friend Ben Moon took. The other images are also Polaroids—of Jennie's sister's dog on the inside and her dad on the back cover.

Speaking of awesome, what was your favorite part about tonight's Echo Curio gig?

Jennie: I love that space. It's really welcoming with all that art around the room.

Peter: Playing there reminded me of the room where we practice at home. It's just really simple, like a living room.

Jennie: When we told our friends where we'd be playing, a bunch of them said, "That's my favorite venue!"

And that bit with the iPhone art was great…

Jennie: Yeah, the iPhone art piece on the wall was interfering with the sound at one point, but it was kinda cool. It sounded like an alien.

I know you just finished this full-length record, but have you already started to work on your next album?

Peter: Not really, but the last song we played is new. On this tour I've gotten tons of ideas about what we could do next and how to approach it. I want to be more deliberate in a lot of things.

Jennie: While Peter was busy and staying up until the wee hours of the morning mixing this album, I was thinking about the types of songs that could go on the next album.

Peter: Realistically though, we have this studio at the house and I want to start working on things whenever we feel like it. I really like the idea of recording songs right after they're conceived—while they still have that original energy.

How has your touring band evolved over the last year or so?

Peter: Our last tour was the two of us with two guitars and a glockenspiel. (laughs)

Jennie: It was what it was.

Peter: But now we also have keyboard, saw, bass, drums… 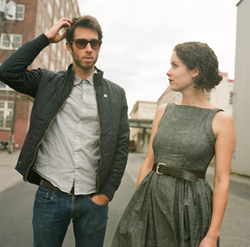 Jennie: Probably what happened today as we were trying to drive down from Monterey. It was crazy with our car breaking down and the engine refusing to respond to anything. But it's an adventure and to get bent out of shape about it would have been a waste of everybody's time and energy. We got to hang out with Peter's cousin longer because she had to rescue us, and we got to see how awesome his entire family is, because most of them live up there.

Peter: They bailed us out and gave us a car to drive to Southern California. After 10 cumulative mechanic hours, it was obvious it just wasn't going to happen with our car today.

Jennie: I felt so good afterward, and I think it's because everything negative was left in that car in Monterey!

In the song "Sunshine Blues" from your last EP, you touch on the darker side of LA, but tonight would you please share one or two of your favorite things about the city?

Jennie: I went to college at the University of Redlands, so I have a very soft spot in my heart for Southern California. The sights and smells here remind me of my fun college days. There's a lot of nostalgia.

Peter: I wrote that song in a hotel room by myself. It wasn't necessarily LA that was making me feel bad, but mainly the fact that I was alone in a hotel room, which is never fun. (laughs)

I really like it here. I was in town last September and spent a day with a friend in Venice Beach. She lives in this beautiful little cottage and we went swimming in the ocean and it totally won me over. She basically heard that song and said, "You're coming and hanging out with me and I'm going to show you how amazing it is." And I was totally blown away.

Thanks for speaking with LAist, Peter and Jennie!

John Heart Jackie's debut album, We Are Gold Mounds, is available now. Listen to their new tunes at www.facebook.com/johnheartjackie and learn more about the band at www.johnheartjackie.com.