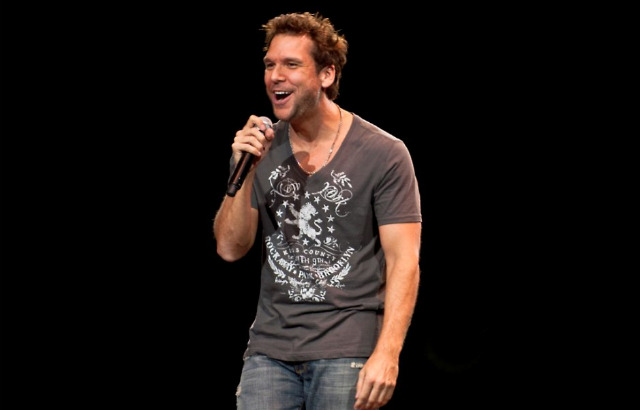 Dane Cook has performed his high-energy brand of stand-up comedy in some of the country's largest arenas including New York's Madison Square Garden, TD Garden in his hometown of Boston and the Staples Center, here in the city he currently calls home. On October 2nd the popular yet polarizing comedian will take the stage at one of Los Angeles' most historic entertainment venues — The Greek Theater.

Cook, who has been called a "comedian phenom and icon" by Entertainment Weekly took some time to exchange emails with us. Our emails with the comedian, whose greatest hits album — I Did My Best hits stores in November, covered topics like the upcoming show at The Greek, the rise to mainstream stardom of Aziz Ansari and Zach Galifianakis, the impact the internet has had on comedy, the backlash that came along with his success and much more.

1) You've got a show coming up at The Greek on October 2nd. Is there any particular reason you chose The Greek?
I’ve performed in almost every location I’ve ever dreamed of performing. From the Café Wah? in NYC to Staples Center here in LA, Boston Garden to the Laugh Factory. Large epic sized shows in high profile venues to hole in the wall hotspots. Yet, I never played the Greek Theater. Now is the time. I said last year when I hit 20 years doing stand up I would put the mic down for a while. Still true but I had a few more stops that were important for me to share my act. I’m performing a new hour of material with special guests popping in. It’s going to be an evening to remember and maybe be the first and last time for me at the Greek.

2) Speaking of venues. During the early 2000s, your shows at Dublin's were very popular. Is there anything you miss about those shows and that venue?
Free show every Tuesday night in Los Angeles. It was upstairs at Dublin’s and it was magic. Well, magic for some, murder for others because if you didn’t deliver at Dubs they delivered a message to you which was "beat it and don’t come back." For five years I walked into that room and walked out a very different comedian with a very different girl on my arm too. Man, the ladies at Dublin's were like super model hot and we loved them for the support.

I have a piece of the stage and the mic we held there. If you performed at that spot it was the closest thing to validation you could ask for. Unless you bombed ... One night we had Home Depot applications that we would hand you if you sucked there. Classic times and future stars started their trajectory there. And future Home Depot employees.

3) Earlier this summer, you were tweeting quite a bit from the set of the upcoming film Guns, Girls and Gambling. What is it about this film that has you so excited?
Gary Oldman playing an Elvis impersonator. He’s awesome and I admire his work. My role is a corrupt sheriff. It’s a stylized thriller. I’m excited by the idea of a director throwing unique motivation at me. How the cast around me traverses the course while staying true to the overall arc of characters and story. It’s like stand up. If you don’t have the proper set up you are not getting laughs off the punch line.

4) In your interview with Howard Stern last year you said "I knew I was going to get smashed" in regards to the backlash you received from the media, critics and other comedians following your success. How did you see it coming? Was there someone who it happened to before you that was an example?
I didn’t see it coming. I felt it from over the mountain I was climbing. Animosities rumbling like a creature storming through the wild. Ha. I had read enough memoirs to know you don’t get to the top without many haters and naysayers. It’s a badge of honor. It really is. You are not vanilla or middle of the road when you have detractors. It says you move people and when you move people those people bump into others that ain’t moving. They stand their ground simply because they hate popular. This is why on reality game shows the strong players are bounced first. Mediocrity rules and the Internet gave mediocre people a meeting place to protest everything active from their couches.

The key to realizing how normal the backlash is and how fine it is is here: Google someone else but NOT yourself. Search your favorite celebs or artists that you admire and read all the crap that gets tossed at them. After that you start hoping more people trash you. I’ve had more highs and lows, hot lists and not lists but I will tell you this: The arenas are full of great fans looking for a memorable night of laughs.

5) Aziz Ansari and Zach Galifianakis are two comedians who have blown up recently. Are you surprised by their rise to stardom?
I met Aziz the other night for the first time and got to talk with him. I congratulated him on his success because I understand how hard it is getting above the radar. He’s a good guy. Zach I’ve met too and he’s someone that I’ve had a little history with. He once had a sign made that said KILL DANE COOK and would show his fans this and they loved it. I guess because that alt versus mainstream thing was in full tilt. Now those guys are mainstream and are trying to maintain the connection with fans that are frustrated at their trade. It’s all business really. Truthfully, Zach and I have the same agent and some of these people I’m with the same accountants and shit.

I’ve only ever cared about creating and collaborating with people like me. Dreamers and doers. I actually would sit with any and every one of them because once you know a person and not a persona you have a new perspective.

6) How has the internet helped stand-up comedy? How has it hurt stand-up comedy? Where do you see stand-up comedy on the internet going next?
It’s helped 99%. It’s about branding yourself and appealing to your network of fans. Branding doesn’t mean bullshit either it means building on the strengths of your character. It’s taking your true image and focusing on what is appealing about you or your message. It’s closer to politics. You may not like my politics but I get elected because I stay relevant and educated to what my fans are seeking out. Sure phony people are doing it too but it’s expensive and time consuming to live a lie. Spend on the truth it’s a better long haul investment. The 1% sucky side is people film your stuff and YouTube it while you are still building the theme and routine. It’s like if a bird was building a nest and every time it flew away to get more crucial twigs you picked at it and futzed with it. Finally that bird isn’t coming back because your messing with it’s untainted creation. Now that bird is going to shit on your car. That’s what I do when people sneaky like film my routine. I find your car and I drop a deuce on your hood.

7) Is it difficult being a Celtics fan in LA? Are you looking forward to seeing Shaq as a Celtic?
It’s not easy being green in LA. Shaq is going to do great things for us. Shaq versus Kobe. Lakers versus Celtics. The rivalry is back in a big way. I'm still funnier then both of them.

Tickets for Dane Cook's shows at The Greek Theater on October 2nd are available now.