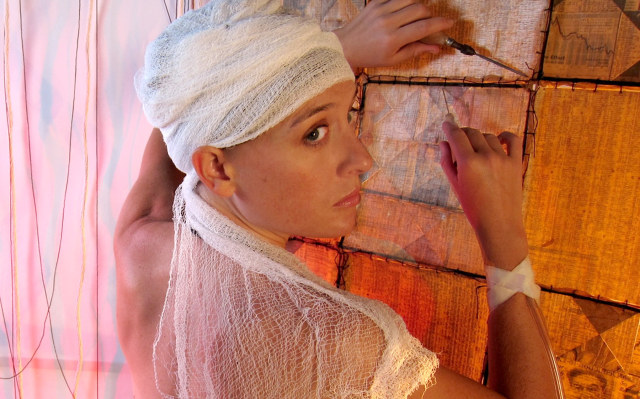 Eva Hesse was an artist known for both her pioneering work with materials such as plastics, fiberglass and latex, as well as her short, tragic career and life. This weekend in Los Angeles, two opening art exhibitions and a new play focus on Hesse's life and work.

Born in Germany in 1936, Hesse and her sister escaped on one of the last kindertransport trains, part of a rescue operation of Jewish children that took place in the months before the outbreak of World War II. While they were eventually reunited with their parents, this proved to be just one of the struggles that Hesse endured. Her work was not only influenced by the pain of the escape, but it was also coupled with her parents divorce, her mother's suicide when she was just 10 years old, her own failed marriage and a brain tumor, which eventually ended her life at age 34.

The play, Meditations: Eva Hesse, opens for a two-day run at Highways Performance Space in Santa Monica on Friday (Sept. 24). Written by Marcie Begleiter and directed by David Watkins, the new play takes audiences through the last day of the artist’s life as she struggles to finish her final work. The production offers a psychological context to the artist’s legacy by providing glimpses of Hesse's memory.

According to the Hammer:

Created when Hesse was just 24, this group of nineteen semi-representational oil paintings stands in contrast to her later minimalist structures and sculptural assemblages, yet constitutes a vital link in the progression of her work...Against a corpus of commentary which has suggested that these particular works are abject exercises of self-deprecation, Eva Hesse Spectres 1960 will examine them as testimonies to a private anxiety. This exhibition aims to further an understanding the development of Hesse’s artistic voice and contribution, as the spectre paintings demand an historical reconsideration of when Hesse became 'Hesse.'