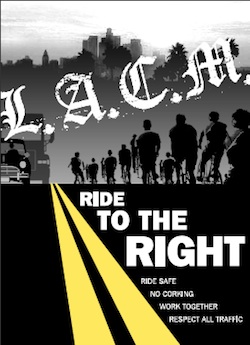 A violent altercation between the LAPD and cyclists on a large group street bicycle ride last May beget something unexpected: a monthly Critical Mass, notoriously known across the country as a leaderless sometimes chaotic event, ride accompanied by the police officers for the last three months.

And now, thanks to police presence, the monthly event has grown. "June was big, July was bigger, and August was just huge," said Stephen Box, a cycling advocate who works with the LAPD in a bicycle working group.

Police estimated that 2,500 riders took to the street last month. But with so many people riding the streets, some logistical problems have arisen. For one, thousands of cyclists can easily spill over into opposite lanes of traffic. It's also hard to split the group up at stop lights, forcing them to block intersections with a technique known as corking.

Both are illegal and something the LAPD, which supports a peaceful Critical Mass ride, wants to curb. At a press conference tonight police officials and cyclists are expected to announce a new initiative to further improve relations while educating cyclists about compliance. Just before this Friday night's ride, officers will work the crowd, shake hands, hand out educational spoke cards (see image to the right), talk to cyclists about the ride and otherwise develop relationships. Basically, at the core, this is community policing.

"I think this is an interesting demonstration in that we've made some progress using social media, a Facebook page, a press conference and some spoke cards to change the world," said Box, who believes that rides will thin out as colder weather sets in. "I guess they'll be trading in a helicopter and getting more Twitter accounts," he joked.

Critical Mass meets the last Friday of every month at 7:30 p.m., starting above ground at the Metro Wilshire and Western stop.