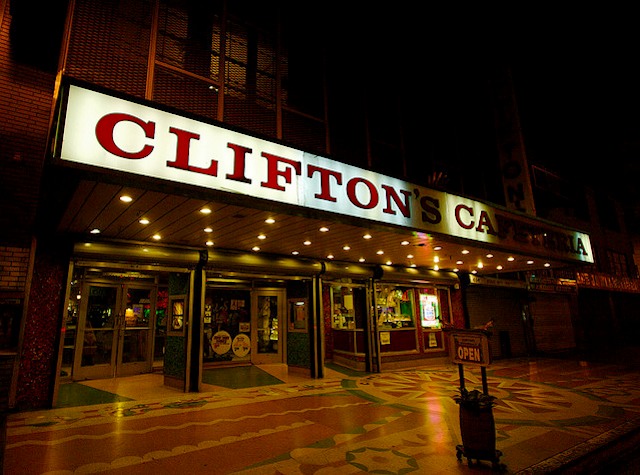 Downtown's historic Broadway corridor was once a retail shopping mecca, a magnet for tourists, a major force for city business and commerce and home to twelve theatres. These days, although still a busy artery, the heyday is obviously gone. The theatres are mostly shuttered, there's a 15 to 20% vacancy rate for ground floor retail and more than one million square feet of commercial space in the upper floors remains unused.

For a couple years now, there's been an effort to revitalize the street known as Bringing Back Broadway. The plan includes streetscaping, a streetcar and once again programming the theatre spaces.

Sometimes revitalization efforts need a boost and today's news about the changes coming to Clifton's Cafeteria could help spur Broadway onto the right path.

News hit Friday that the 1930s eatery had been bought by Andrew Meieran, owner of The Edison, one of the city's most popular bars. Speculation surrounded what he would do with the space, but today he put to rest all of that.

“We feel honored to be a part of the Clifton’s legacy and the history it represents and are working closely with Bringing Back Broadway and the Conservancy to ensure Clifton’s iconic tribute to American idealism, hope and imagination will be preserved and enjoyed for generations to come,” Meieran said. “We hope the venue will once again help establish Broadway as a nightlife destination and will help bring life to Broadway after dark.”

Plans include turning Clifton's into a 24-hour operation with an updated menu, but maintaining the cafeteria-style food service. On the underutilized top floors, he will transform them into a nightlife destination with a neighborhood lounge and sit-down restaurant service. Also on the top floor is the shuttered bakery, which will reopen to sell baked goods under the Clifton brand.

Much of the cafeteria will be restored to its original condition, maintaining historic elements, but also updating the building's systems and infrastructure, including disabled access and restrooms.

That news made the people at the Los Angeles Conservancy happy. Executive Director Linda Dishman said her organization was thrilled with today's announcement.

Councilmemember Jose Huizar, who represents the area, chimed in on the issue, too. “Historic preservation is not about pressing the pause button indefinitely, but about finding ways to honor the wonderful history that makes Broadway so special, while utilizing our historic buildings and businesses in innovative ways that allow them to be successful and vital into the next generation, while serving our diverse community,” he said.

The move to start 24-hour service will also create around 100 jobs. Meieran plans on filling some of those with homeless graduates from a program from the Midnight Mission that provides restaurant training and certification.